Wallabies coach Dave Rennie has made eight changes for the third and series-deciding Test against France.

Queenslander Tate McDermott and Brumbies pair Darcy Swain and Len Ikitau have been named for their first starts in the gold jersey, while Waratahs enforcer Lachlan Swinton has been brought straight into the run-on team for his first Test this year.

Stalwart James Slipper will start alongside Brandon Paenga-Amosa in the front row in all three Tests, with Allan Alaalatoa recalled at starting tighthead prop for the match at Suncorp Stadium, Brisbane.

Swain will partner Lukhan Salakaia-Loto in the second row.

Isi Naisarani is set to start at no.8 for the first time since the 2019 Rugby World Cup quarter final, combining with skipper Michael Hooper and Swinton, in a new look backrow.

Reds number nine McDermott will partner the sharp-shooting Noah Lolesio in the halves.

A new look midfield sees Ikitau combine with Hunter Paisami who moves from outside to inside centre for the decider. 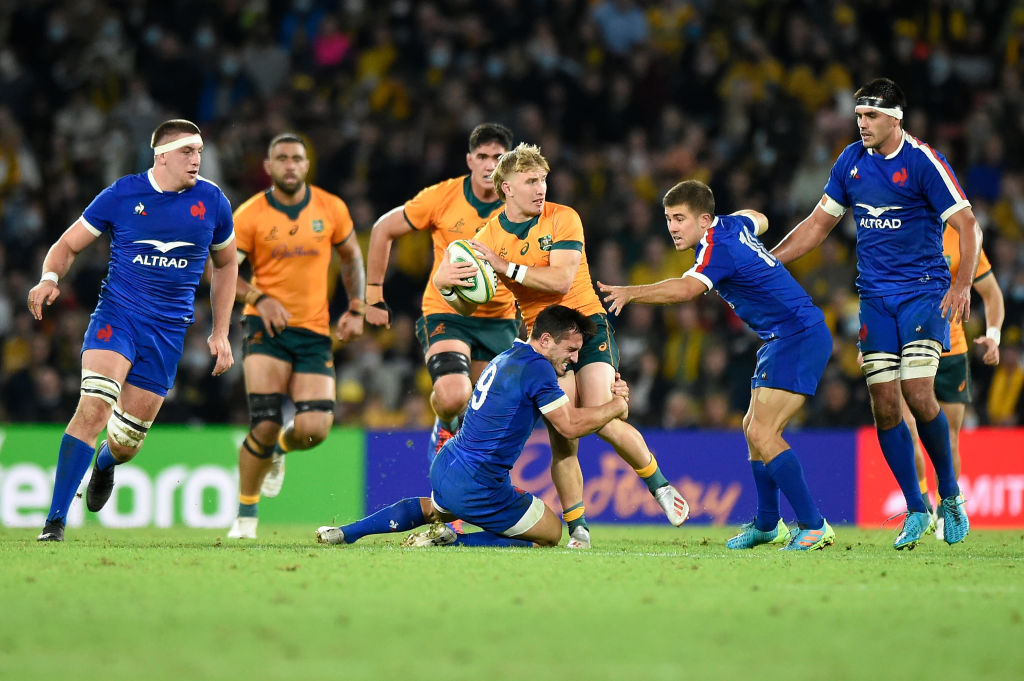 Speedster Filipo Daugunu has been selected for his first Test of the year on the right wing, with Tuesday night’s Man of the Match, Marika Koroibete to start on the opposite edge.

Tom Banks has again been named at fullback after a strong performance in Melbourne.

Rebels hooker Jordan Uelese has earned a recall to the national side as the replacement hooker, with Angus Bell and Taniela Tupou the other front row finishers.

After back-to-back starts, Matt Philip and Rob Valetini will create impact off the bench as the remaining forward cover.

Jake Gordon will be asked to do the same as the replacement scrumhalf with the experienced Matt To’omua to cover the playmakers in the Test match.

The versatile Reece Hodge will make his first appearance in Wallaby gold this year via the pine.

Wallabies coach Dave Rennie said: “We always knew with the scheduling of the series against a tough French side, that it would require a full squad effort and we’re going to see that on Saturday night.”

“We were disappointed with the result in Melbourne and we’ll be out to rectify that with more accuracy and composure in key moments at Suncorp Stadium.

“As always, we’ve picked a team that has earned the right to wear the gold jersey and we’re confident they’ll get the job done in Brisbane.”

Galthie also shook up the backs, with Racing's Thomas, France's most experienced player who has scored some brilliant tries for his country, getting the nod for the first time on tour. Fly-half Antoine Hastoy and centre Pierre-Louis Barassi also get starts.