Winning Without The Ball

The Springboks are 2019 TRC Champions.... how did they do it and what were the key facts in this year's Championship?

South Africa are The Rugby Championship champions for the first time since 2009 after a comprehensive win over Argentina and a shock loss by the All Blacks against Australia in the final round catapulted them to top spot on the 2019 ladder.

Indeed, it was just the second time in the history of The Rugby Championship and Tri-Nations that the Springboks finished a campaign undefeated, picking up two wins and a draw in their campaign this year. The only previous time they did so was in the 1998 edition of the Tri-Nations, picking up four wins from as many games to clinch their first ever trophy in the competition.

This time out, South Africa have won the game without the ball – showing the remaining three teams what it means to dominate in defence.

The Springboks had an average of just 16 minutes and 26 seconds of time in possession per game in The Rugby Championship 2019, more than half a minute less than any other team in the competition. Fittingly, their 12 turnovers conceded were seven fewer than the 19 conceded by every other team in the competition, while only Argentina (8) forced more turnovers than the Springboks (7).

Only New Zealand – with whom South Africa played out a thrilling 16-16 draw in Round 2 – finished with better tackling figures than the Springboks this season. South Africa’s 84% tackle success rate from an average of 140 tackles per game where higher than that of both Australia and Argentina and only marginally lower than that of the All Blacks (88%, 143).

At an individual level, none were more effective at forcing a turnover from the opposition this tournament than South Africa’s Francois Louw [pictured], who won five turnovers throughout the campaign – more than any other player. 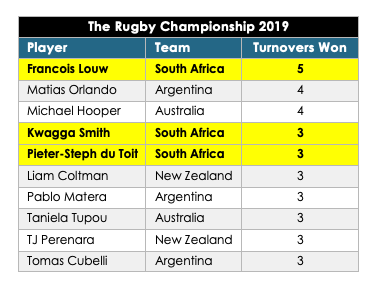 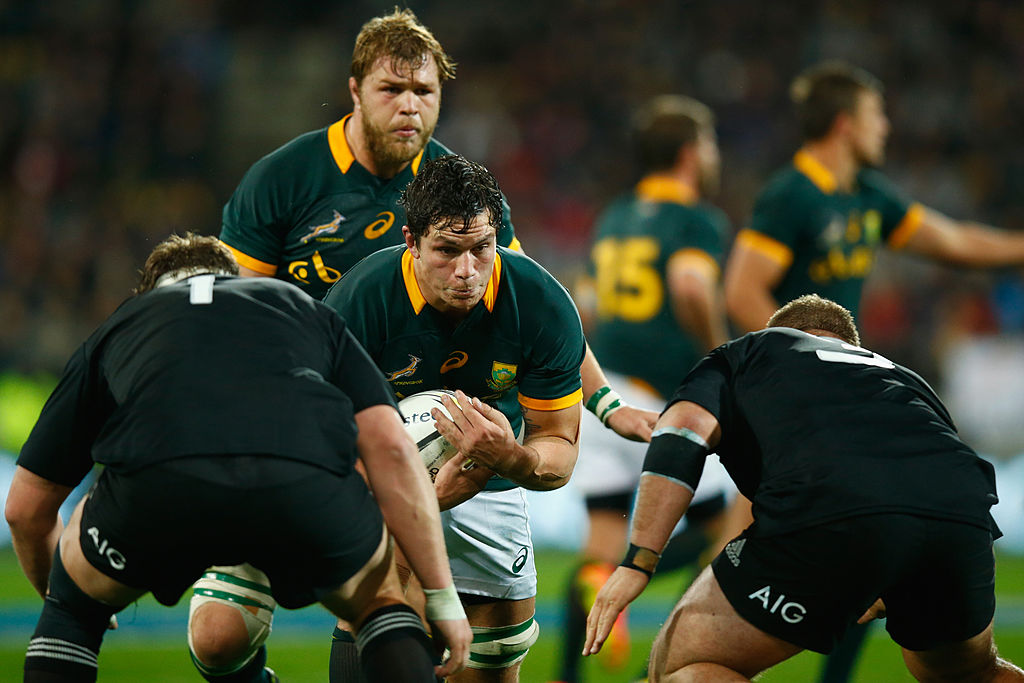 Not far behind him were team mates Kwagga Smith and Pieter-Steph du Toit – who won three apiece. They were three of just 10 players to win three or more turnovers throughout the three-round competition this year.

Matias Orlando (Argentina) and Michael Hooper (Australia) weren’t far behind Louw – each winning four turnovers through the tournament – but fell one shy of the Springbok’s tally after three weeks. 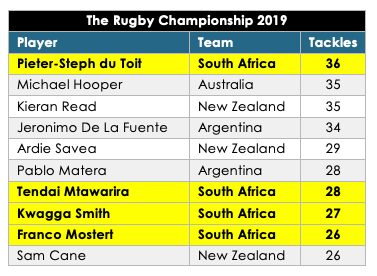 Pieter-Steph du Toit was among the premier defenders in the competition in terms of raw tackle output, as well. The Springbok made a competition-high 36 tackles throughout The Rugby Championship 2019, while team mates Tendai Mtawarira (28), Kwagga Smith (27), and Franco Mostert (26) each figured within the top 10 in this regard as well.