On a night to remember in the iconic Salle des Étoiles, Monaco, a ceremony under the High Patronage of H.S.H. Princess Charlene of Monaco saw the greats of the game past and present and the rugby family celebrate the outstanding achievers of the year.

Van der Flier was named the World Rugby Men’s 15s Player of the Year 2022, the third Irish winner after Keith Wood (2001) and Johnny Sexton (2018). He received the award ahead of three other nominees in Lukhanyo Am (South Africa), Antoine Dupont (France) and Johnny Sexton (Ireland).

The recent Rugby World Cup-winning captain Demant said: "Like most of our team, and like many players in New Zealand, I come from a very, very small place. And to be able to put on the black jersey it was a dream. I never knew about the Black Ferns growing up as a kid. I guess like most women my age, women's rugby was never accessible, was never something that you kind of aspired to be like, because you never had role models like that to look up to. And that was one of the great things about this World Cup, it was free to air, so everyone could watch it. But people could turn on the TV or go to the games and see people that look like them and so many strong women out there doing amazing incredible things. We had a great bunch of girls who put their heart and soul and body on the line for everyone, regardless of whether or not they're playing. So we got the job done. But we also had a great time a lot of fun doing it as well."

Josh van der Flier said: "I've been incredibly fortunate to have great teammates and coaches that have really pushed me on, as well as my wife and my family supported me a huge amount. I'm lucky to have some very experienced, top quality players and especially in my position both in Ireland and in Leinster, so I've always felt I've needed to be playing at my best the whole time or I wouldn't be playing, so that's certainly driven me on."

World Rugby Chairman Sir Bill Beaumont said: “On a special night, there was so much to celebrate about a remarkable 2022, but for me it was the power of personality that has stood out this year.

“Rugby World Cup 2021 and Rugby World Cup Sevens 2022 were shining examples of rugby’s personality in action. The way that players engage with fans and their accessibility shows that high performance athletes can and should be themselves and have fun. They inspired, they moved and they played brilliant rugby.

“As a sport, we must harness and celebrate the power of personality if we are to grow, to be relevant and attract new audiences. In our award winners, we have superb role models, but by being accessible on social media, the next generation of players and fans can relate to them.

“Congratulations to all our award winners, but just as importantly, I would like to congratulate everyone who has played their part in getting our sport back up and running since the pandemic – the coaches, match officials, players, mums, dads and fans. Without you there is no sport.”

Nine of the winners were selected by the star-studded World Rugby Awards panels, while the rugby family had the opportunity to cast their votes for the International Rugby Players Men’s and Women’s Try of the Year categories on World Rugby social platforms. 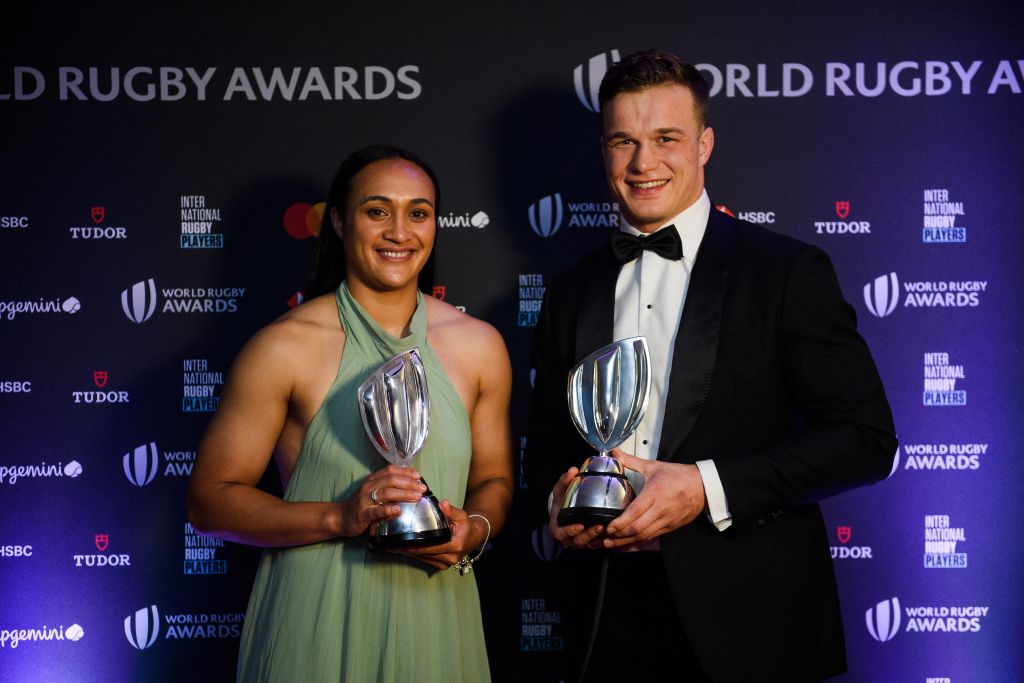 Described by Wayne Smith as “one of the best leaders I’ve ever had in a team”, co-captain Ruahei Demant was the architect of New Zealand’s Rugby World Cup 2021 success, driving the team forward as she led by example and brought the game plan to life. A calming presence when the pressure dial ramped up, the fly-half was named Mastercard Player of the Match in the final – her 11th test of the year.

Flanker Josh van der Flier was at the forefront of Ireland’s play throughout the year, including in their historic series victory over the All Blacks in New Zealand. The 29-year-old started all 11 of Ireland’s tests in 2022, scoring four tries. A powerful ball carrier in attack, Van der Flier was equally impressive on defence with his relentless tackling and tireless work at the breakdown.

Appointed as director of rugby six months out from Rugby World Cup 2021, Wayne Smith transformed a New Zealand side that had suffered record losses to England and France last November into world champions for a sixth time following a 34-31 victory over the Red Roses in the final at a sold-out Eden Park. The Professor, as Smith is known, implemented a change in mindset and playing style that the players embraced and met his challenge to be true to their DNA and play an attacking and unstructured style of rugby.

A former World Rugby Women’s Sevens Player of the Year, Ruby Tui has made the switch to 15s look easy since making her Black Ferns debut against Australia in June and was one of the stars of Rugby World Cup 2021. The 30-year-old has started 10 of New Zealand’s 12 tests in 2022, scoring eight tries and setting up countless others as she relished the freedom the Black Ferns’ attacking approach afforded their back three.

Ange Capuozzo announced his arrival on the world stage in March with a bang, scoring two tries off the bench against Scotland and then made a length-of-the-field break against Wales to set up the try that ended Italy’s seven-year, 36-match losing run in the Six Nations. The livewire full-back epitomises the youngsters coming to the fore for Italy under coach Kieran Crowley and scored twice to help the Azzurri beat Australia for the first time a week ago.

The first Ireland player to receive the coveted award, Terry Kennedy enjoyed a remarkable year in the green jersey, his lightning footwork and speed making the playmaker a constant threat. One of the originals from the start of the Irish sevens programme in 2015, Kennedy scored 50 tries on the Series – the eighth different men’s player to reach a half century – and earned a place in the Dream Teams for both the Series and Rugby World Cup Sevens 2022.

Charlotte Caslick becomes the second player to win this accolade twice, having first received the award in Australia’s Olympic gold medal winning year of 2016. Appointed co-captain a few days before her 27th birthday in March, Caslick was at the heart of Australia’s unprecedented treble of HSBC World Rugby Sevens Series, Commonwealth Games and Rugby World Cup Sevens success in 2022. Caslick scored 31 tries on the 2022 Series and finished as the DHL Impact Player.

Tappe Henning has been integral to refereeing and its development across both the professional and amateur forms of the game for more than 20 years. A veteran of 15 tests as referee from 1995-2005, Henning’s contribution to the game since hanging up the boots has been his biggest legacy, working with match officials in both South Africa and Scotland as well as in competitions such as Super Rugby and the United Rugby Championship. The South African is also known throughout the refereeing world as the ‘law guru’ and the go-to person for any technical law related questions.

A three-time Rugby World Cup winning captain of the Black Ferns between 1998 and 2006, Dr Farah Palmer has been a leading light in women’s rugby for more than two decades. The first female on the Board of New Zealand Rugby and now its Deputy Chair, Palmer is also Chair of the New Zealand Māori Rugby Board. Inducted into the World Rugby Hall of Fame in 2014, her passion has inspired countless women and girls to play the game, while her support of the Māori community is unwavering and equally inspiring.

With 50 minutes on the clock in the first leg of the Americas 2 qualifier in Santiago, Chile fly-half Rodrigo Fernandez fielded a box kick just outside his own 22 and side-stepped the onrushing USA defender. Defying the treacherous conditions underfoot caused by the heavy rain, Fernandez wasn’t done there and slalomed his way past five more players to score a sublime 75-metre solo try.

England turned the ball over metres from their own line early in the second half of their Rugby World Cup 2021 semi-final with Canada in Auckland, working the ball quickly out wide to Claudia MacDonald. She set off from behind her own try-line, stepping her way through the defence before finding fellow winger Abby Dow in support who then raced 65 metres to score.

Bryan Habana played 124 tests for South Africa, scoring 67 tries from 2004-16. The winger helped the Springboks win their second Rugby World Cup crown in 2007 and shares the record as top try-scorer in men’s Rugby World Cup history with Jonah Lomu on 15. Off the field, Habana has worked with International Rugby Players and the South African players’ association My Players, setting a benchmark for what it means to serve the game beyond the pitch – from his fundraising efforts benefitting hard-hit communities to ensuring players across men’s and women’s 15s and sevens at the highest levels have their voices heard.