All Blacks See Off Brave Pumas

New Zealand retained their unbeaten status in this year’s Rugby Championship when they claimed a 46-24 win over Argentina in Nelson in Round.

As usual, the All Blacks’ brilliance on attack laid the foundation for their win but they had to work hard for this result as Argentina also impressed with ball in hand and were competitive for long periods.

The world champions’ class shone through in the end though and they eventually outscored the Pumas by six tries to three with TJ Perenara crossing for a deserved brace.

The All Blacks had the better of the early exchanges and opened the scoring in the fifth minute couertesy of a Richie Mo’unga penalty after the Pumas capitulated under pressure at a scrum deep inside their half.

Argentina had a chance to draw level from the kicking tee, when Ardie Savea went off his feet at a ruck shortly afterwards, but Nicolas Sanchez’s shot at goal was wide of the posts.

The All Blacks suffered a major setback in the 10th minute when Brodie Retallick, Ngani Laumape and Ben Smith were all forced off the field through injury which saw Sam Whitelock, Anton Lienert-Brown and Damian McKenzie entering the fray as their replacements although Smith would return to action after passing a Head Injury Assessment.

Things went from bad to worse for the home side five minutes later when Ramiro Moyano found himself in space just inside the All Blacks’ half and he did brilliantly to step past three defenders before crossing for the opening try.

Sanchez added the extras which meant the Pumas were leading 7-3 after 15 minutes but the All Blacks regained the lead midway through the half when Codie Taylor offloaded to Nehe Milner-Skudder, who cantered in for an easy try which was converted by Mo’unga.

The All Blacks were slowly gaining the upper hand especially in the forward exchanges where rookie flanker Shannon Frizell was particularly impressive with several barnstorming runs.

And on the hour-mark, the world champions extended their lead when TJ Perenara crossed the whitewash from close quarters after strong carries from Frizell, Ardie Savea and Jack Goodhue in the build-up.

Five minutes later, Sanchez glided through a gap in the home side’s defence before offloading to Matias Moroni, who dotted down in the right-hand corner but his effort was disallowed when television replays revealed that he put a foot in touch after an excellent cover tackle from Perenara.

And on the stroke of half-time Mo’unga added another penalty which gave his side an 18-7 lead at the interval.

But despite trailing by 11 points, Argentina were fastest out of the blocks in the second half and two minutes after the restart, Sanchez beat Owen Franks with deft footwork deep inside New Zealand’s 22 before crossing for a deserved try.

Sanchez added the extras but despite seeing their lead slashed to four points, the All Blacks did not panic and in the 50th minute Kieran Read crossed for their third try after a superb line break from Smith in the build-up.

That score gave the world champions some breathing space but Argentina would not surrender and a Sanchez penalty made it 25-17 to the All Blacks after 56 minutes.

The All Blacks continued to dominate, however, and on the hour-mark Lienert-Brown made a telling break before offloading to Perenara, who had an easy run-in for his second try.

Mo'unga's conversion was successful but despite holding a 32-17 lead, the All Blacks had not secured the result yet and in the 70th minute, Emiliano Boffelli crossed for a well-taken try which meant Argentina were trailing by eight points after Sanchez added the conversion. 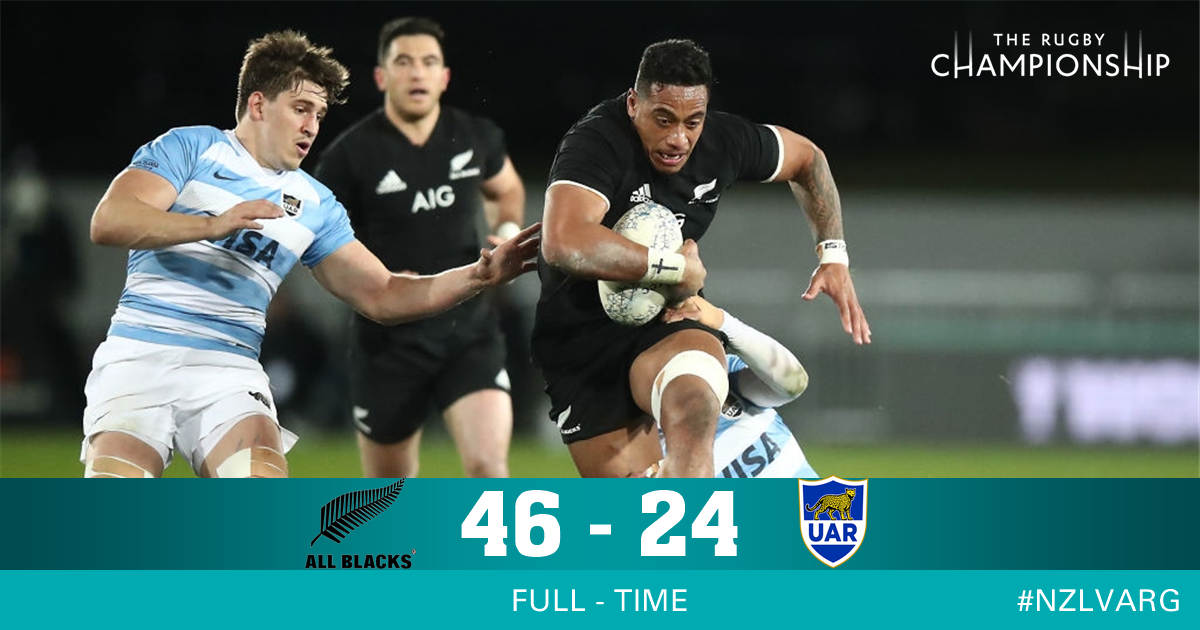