New Zealand wrapped up a third successive Rugby Championship title on Saturday after they beat Argentina 35-17 at Estadio Jose Amalfitani.

Tries from Rieko Ioane (2), Waisake Naholo, Patrick Tuipulotu and Anton Lienert-Brown saw them prevail, with Beauden Barrett kicking eight points while replacement Richie Mo’unga added the other conversion as New Zealand bounced back from that loss to the Boks in good fashion.

For Argentina this was a frustrating performance on home soil as they could not build on their away win over Australia. Tomas Cubelli and Emiliano Boffelli scored their two tries while Nicolas Sanchez kicked seven points as their long wait for an All Blacks’ scalp continues.

New Zealand were dealt a blow before kick-off when Luke Whitelock was ruled out, which meant Ardie Savea came into the XV at number eight. With Kieran Read, Brodie Retallick and Owen Franks also missing from their forward pack, the All Blacks looked somewhat depleted up front. 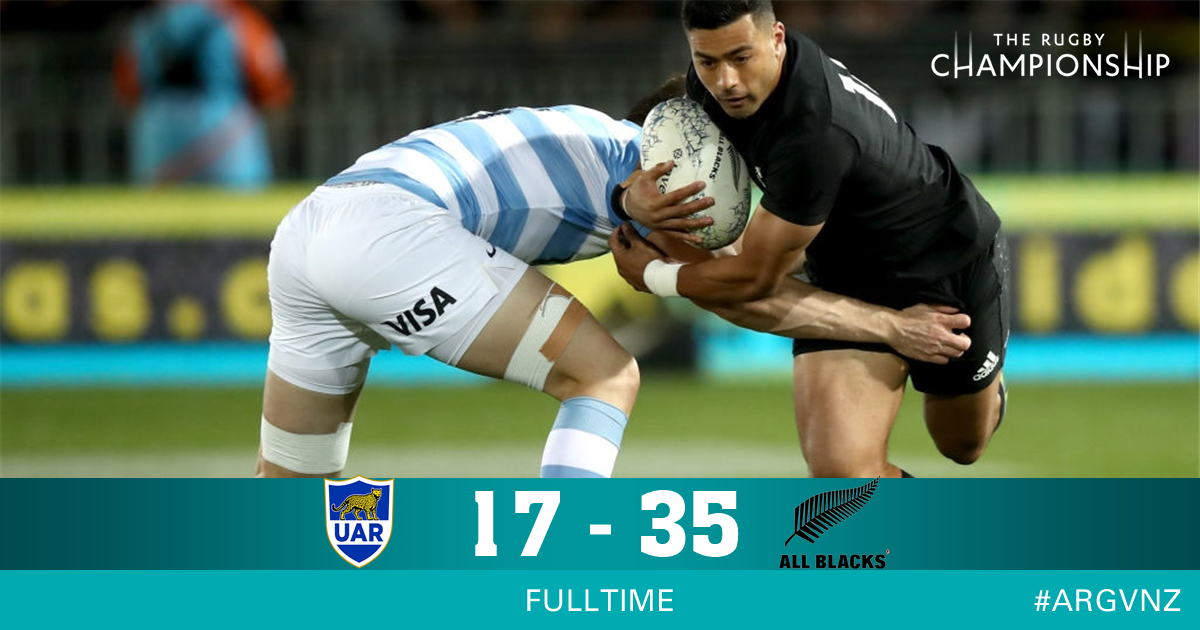 Argentina took an early 0-3 lead on six minutes when Shannon Frizell was penalised at the base of the ruck. But the All Blacks hit back in style two minutes later with wing Naholo’s run leading to Ben Smith finding Ioane for the contest’s opening try. Barrett converted for 7-3.

Sanchez had a chance to reduce that gap down to one point a minute later, but uncharacteristically missed a relatively simple shot at goal.

New Zealand soon made the Pumas fly-half pay for that miss when Naholo crashed over following a dominant New Zealand scrum to make it 14-3.

What added to Argentina’s worries was their scrum once again looking decidedly fragile as New Zealand turned the screw. That ultimately led to Ioane claiming his second try of the match on 30 minutes as the resulting passage saw him collect loose ball for a score down the left.

Argentina desperately needed points before the break and even with Sonny Bill Williams yellow carded for coming offside, it would not come.

The Pumas began the second-half as they ended the first as they enjoyed the lion’s share of possession and territory. However, chances were blown in the red zone as New Zealand somehow survived as centre Williams returned from the sin-bin with the score the same as when he left.

It was Williams too who turned the match in terms of momentum on 54 minutes as his offload on halfway saw Ioane go close. From an ensuing attack replacement second-row Tuipulotu’s crossed, which came thanks to a lovely pass in close quarters from loosehead Karl Tu’inukuafe.

Argentina finally got over the whitewash on 59 minutes, if in fortuitous circumstances, with Cubelli’s try allowed despite clear double movement. Sanchez converted that score as it was now 28-10 with both coaches having now emptied their benches for the closing 20 minutes.

Boffelli then made it 28-17 with 12 minutes left after a strong carry from Pablo Matera to give Argentina hope, but that was extinguished seven minutes before full-time as Mo’unga’s smart grubber saw Lienert-Brown ground next to an upright to secure the win and the silverware.