Argentina ended an eleven-match losing streak in the Rugby Championship when they claimed a deserved 32-19 win over South Africa in Mendoza on Saturday.

The home side were full value for their win as they dominated for large periods and eventually outscored the Springboks by four tries to three with Nicolas Sanchez leading the way with a 17-point haul courtesy of a try, three conversions, a penalty and a drop goal.

Apart from a brief period during the first half, when they held the upper-hand, the Springboks found the going tough and they seemed shell-shocked by the intensity with which los Pumas approached this match.

The hosts' forwards deserve plenty of credit for matching the Boks' physicality and this allowed their backs to play with freedom and Sanchez to dictate proceedings.

South Africa made the brighter start but despite doing most of the early attacking, it was Argentina who opened the scoring courtesy of a Sanchez penalty in the fifth minute, after Frans Malherbe was blown up for not releasing the ball on the ground.

The Boks had an opportunity to draw level in the 12th minute, after Pablo Matera strayed offside on defence on the edge of his 22, but Handré Pollard pushed an easy shot at goal wide of the uprights.

Shortly afterwards, the visitors took the lead courtesy of a well-taken try from their captain, Siya Kolisi. This, after he slipped out of a tackle from Sanchez close to Argentina's 10-metre line and although he still had plenty of work to do, he did well to sell the cover defence a dummy before diving over.

Pollard added the extras but Argentina put that setback behind them and soon took the game by the scruff of the neck as they would score three tries during a 10 minute blitz.

First, Bautista Delguy rounded off in the right-hand corner in the 20th minute after Emiliano Boffelli tore the Bok defence to shreds with a superb line break just inside the visitors' half. Boffelli then drew in a defender before offloading to Bautista Ezcurra, who got a pass out to Delguy and he went over the whitewash despite a desperate cover tackle from Willie le Roux.

Three minutes later, the Pumas forwards did well to get the better of their counterparts at a scrum close to the halfway line before Javier Ortega Desio gathered and made a telling break before the ball was shifted to Delguy, who beat Le Roux with ease before crossing for his second try.

The home side had their tails up and things went from bad to worse for the Springboks in the 26th minute when Eben Etzebeth was yellow carded for slowing the ball down cynically close to his try-line.

And two minutes later, Argentina went further ahead when Sanchez rounded Malcolm Marx down the left-hand touchline before diving over for his side's third try. He made no mistake with the conversion attempt which gave his side a 24-7 lead.

Argentina were now brimming with confidence and in the 36th minute, Sanchez hammered home their advantage when he landed a drop goal from 35 metres out which meant los Pumas held a commanding 27-7 lead at half-time.

They continued to dominate after the restart and six minutes into the second half Matias Moroni did well to get a pass out to Ramiro Moyano, who had an easy run-in for his side's fourth try.

Sanchez failed to convert with his side holding a 32-7 lead, which meant the visitors had a mountain to climb if they wanted to wanted to win this Test. And although the Boks showed more urgency on attack, they committed far too many unforced errors which cost them dearly in the end.

That try seemed to reinvigorate the Boks and they held a slight advantage for the next 15 minutes. On the hour-mark, they thought they had narrowed the gap when Dyantyi crossed the whitewash, but his effort was disallowed when the final pass from Lukhanyo Am went forward.

South Africa continued to chase the game and were rewarded in the 65th minute when Mapoe crossed for his second try after good work from his forwards in the build-up.

The rest of the match was a topsy-turvy affair with both sides running the ball from all areas of the field and although the Boks spent large periods camped inside los Pumas' half, the home side finished stronger and held on for the win. 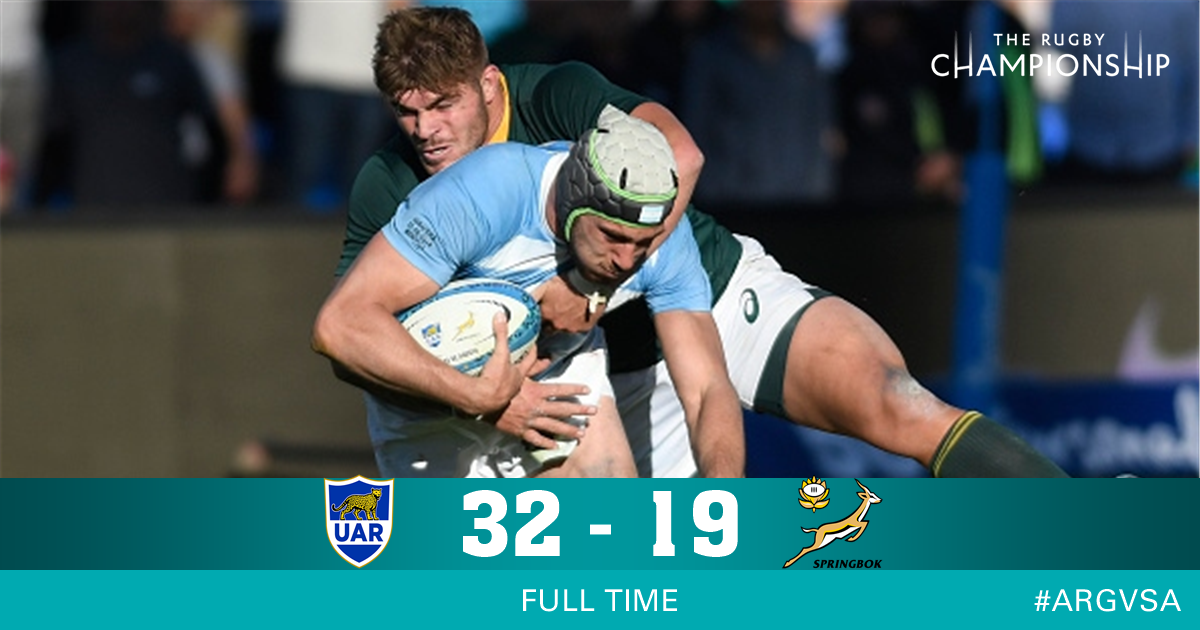