Argentina returned to winning ways in the Rugby Championship when they claimed a hard-fought 23-19 win over Australia on the Gold Coast on Saturday.

The result is a significant one for the Pumas as it ends a nine-match winless run in away matches in the Rugby Championship and it's the first time they have beaten the Wallabies in Australia since 1983.

In a tightly contested clash, Australia outscored their visitors by three tries to two, but they committed too many unforced errors which helped Argentina to secure the result.

The win means the Pumas move into third position on the Rugby Championship table while the Wallabies are in last place.

Argentina held a slight edge during the opening exchanges and opened the scoring in the fifth minute via a monster penalty from Emiliano Boffelli from just inside his half.

The Wallabies struck back five minutes later when Will Genia rounded off a well-worked move. Dane Haylett-Petty started the attack when he put Reece Hodge into a gap with a fine offload before Hodge threw an inside pass to Genia, who crossed for the opening try which was converted by Matt Toomua.

Australia's lead did not last too long though as Argentina responded with a Nicolas Sanchez try three minutes later. This, after they set up some phases inside the Wallabies' half before Jeronimo De La Fuente offloaded to Sanchez, who dotted down.

Sanchez added the extras but the topsy-turvy nature of this game continued when Israel Folau left his stamp on this match in spectacular fashion midway through the half.

The cross-code star, who was playing on the wing, showed his class as he beat five defenders on a mazy run before dotting down in the left-hand corner.

Toomua slotted the conversion which gave the home side a 14-10 lead but Argentina struck back when Sanchez crossed the whitewash in the 31st minute. His joy was short-lived, however, as television replays revealed that Ramiro Moyano put a foot into touch in the build-up, after a great tackle from Genia.

Despite that setback, the Pumas continued to attack and they were rewarded in the 36th minute when Bautista Delguy crossed for their second try. Pablo Matera did well with a fine break in the build-up and although Delguy had plenty of work to do when he gathered the ball, midway between Australia's 10-metre line and their 22, he did well to beat Haylett-Petty before cutting inside on his way over the tryline.

Sanchez's conversion meant the visitors held a slender 17-14 lead as the teams changed sides at half-time.

Two minutes into the second half, Argentina thought they had extended their lead when Boffelli crossed the Wallabies' tryline but, once again, the visitors had a try disallowed when the television match official ruled that the final pass from Delguy was forward.

Argentina put that setback behind them and took a six-point lead when Sanchez added a penalty in the 48th minute. The Wallabies did not panic and in the 55th minute, they reduced the deficit when Haylett-Petty ran onto a pass from Hodge before dotting down although Toomua failed with the conversion attempt which would have given his team the lead.

That proved costly as both sides battled to gain the ascendancy over the next 20 minutes. The Pumas finished stronger though and in the 77th minute Bofelli landed another long range penalty which sealed his side's victory. 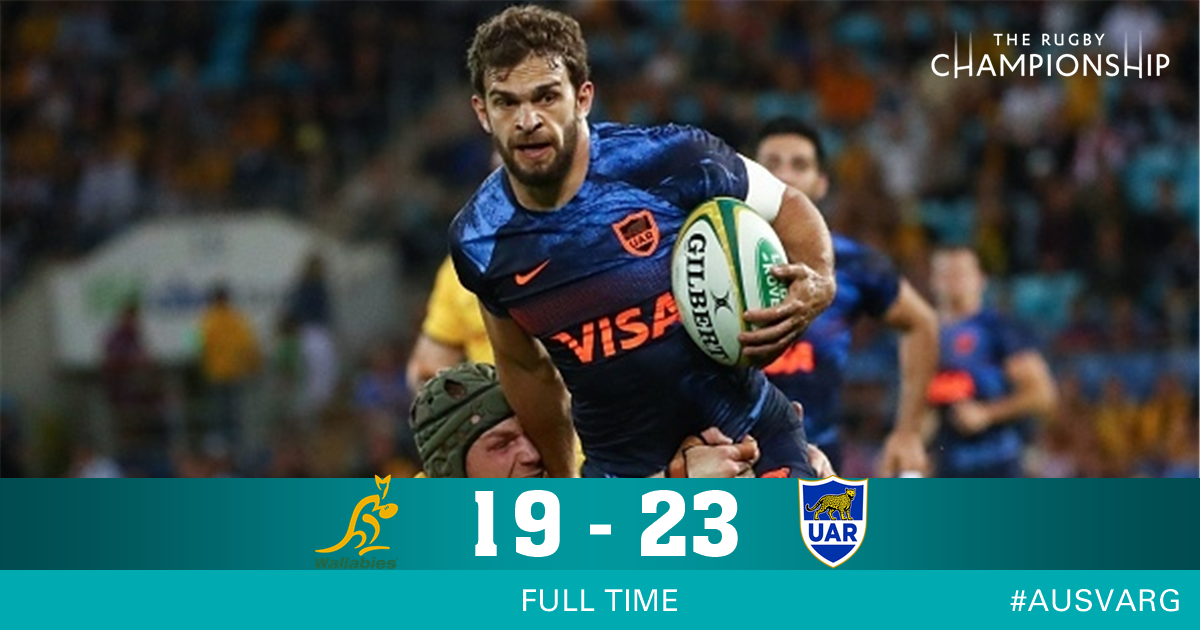