Changes for Wallabies and Pumas for Last TRC Clash

Head coaches Dave Rennie and Mario Ledesma have both made changes to their teams for their second and final clash of The Rugby Championship.

Wallaby and Brumbies backrower Pete Samu has forced his way in to the starting side for the first time in 2021, named at blindside flanker in the side’s final eToro Rugby Championship clash against Argentina on the Gold Coast.

Meanwhile, evergreen prop Greg Holmes has been selected to make his return to the International arena for the first time since 2016 via the pine, alongside reserve loose forward Sean McMahon, who will suit up in the Wallaby gold for the first time since 2017. At 38-years-old, Holmes will become the oldest Wallaby to play a Test since World War II after representing the Wallabies at the Rugby World Cup in 2007 and 2015.

There are two other changes to the starting side, with young gun Jordan Petaia named to start on the right edge with Marika Koroibete having returned to Melbourne to spend time with his newborn and young family after an extended period on the road. Darcy Swain rotates into the starting second row with Matt Philip shifting to the bench.

Swain will partner Izack Rodda in the second row, with the latter set for his fourth consecutive start in the gold jersey.

The side will also be chasing four wins in a row for the first time in the eToro Rugby Championship when openside flanker Michael Hooper leads them out at Cbus Super Stadium. He’s joined in the backrow by Samu and Rob Valetini who is enjoying his most consistent Test season this year.

Nic White will again partner Quade Cooper in the halves, with an unchanged midfield comprising the in-form Samu Kerevi and Len Ikitau who continue to build a solid centre combination.

Rebels star, and last week’s first try-scorer, Reece Hodge will again wear the number 15 jersey, with Andrew Kellaway moving to the left wing for the first time in his International career, with Petaia on the right edge.

Holmes will join Angus Bell and Lachlan Lonergan as the reserve front rowers, the latter making his first appearance since the final Bledisloe Cup match in Perth. Philip and McMahon are the remaining forward replacements.

Waratahs skipper Jake Gordon also returns to the matchday 23 as the reserve scrumhalf, with James O’Connor lining up for his second Test after a successful return from injury in the 27-8 win over Los Pumas in Townsville. Tom Wright has been named for his first Test since the victorious France Series as the reserve outside back.

Wallabies coach Dave Rennie said: “Pete’s been outstanding for us coming on as a replacement in the past few Tests and has earned his opportunity to show what he’s capable of from the kick off this weekend.”

“Both Greg and Sean have worked extremely hard on the field and around their detail off the field and they’re both super excited to represent their country again on Saturday evening.

“We’ve felt really well supported during all of our Tests in Australia this year and we’re looking to finishing the Rugby Championship with a performance the team and the country can be proud of.”

The venue capacity for Cbus Super Stadium has been reduced to 75% for Saturday night, in line with Queensland Health Level Two protocols announced this morning.

With a revised capacity of 20,767, Rugby Australia and Ticketek are working to reduce capacity accordingly on a 'first-in' basis from when tickets were purchased. 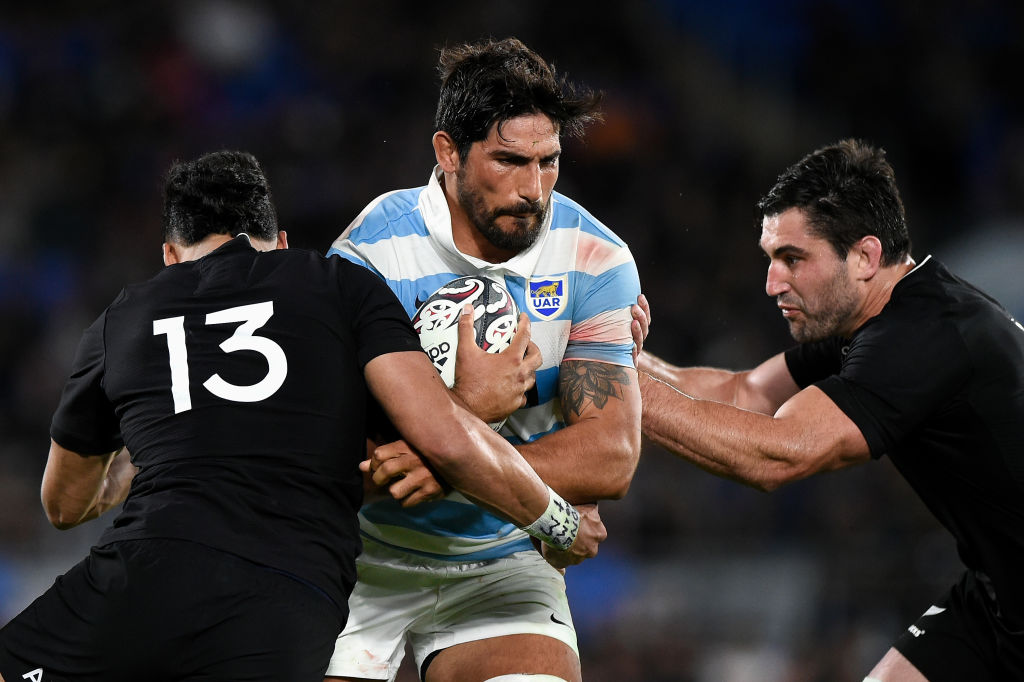 Pumas head coach Mario Ledesma has made five changes to his starting line-up for the Rugby Championship Test against the Wallabies.

The side has been rocked by the news of six Argentina players being ruled out of this game for crossing the New South Wales border from Queensland – along with two of the team’s management staff – without the permission of tournament organisers.

That means Ledesma had a more challenging selection task as three of the suspended players – Pablo Matera, Santiago Medrano and Santiago Socino – were part of the matchday squad in last week’s corresponding fixture against Australia in Townsville.

Matera has been replaced by Rodrigo Bruni [pictured above] at No.8 while Enrique Pieretto takes over from Medrano at tighthead prop and Facundo Bosch comes in for Socino as the replacement hooker.

There are three other changes to the starting line-up with Rodrigo Martínez preferred to Facundo Gigena at loosehead prop, Matias Moroni lines up on the right-wing instead of Santiago Cordero and Guido Petti takes Matías Alemanno’s spot in the second-row.

Experienced hooker Julián Montoya continues to lead the team and there are some new faces on the bench with Thomas Gallo and Eduardo Bello the reserve props, while Francisco Gorrissen replaces Joaquín Oviedo as back-row cover.