Andrew Kellaway scored a hat-trick as the Wallabies signed off their TRC campaign with a 32-17 victory over the Pumas on the Gold Coast.

Australia were full value for their win and dominated for most of the match to outscore Argentina five tries to two, with Folau Fainga'a and Samu Kerevi crossing for their other five-pointers while Quade Cooper added a couple of conversions and a penalty.

For the Pumas, a strong late fightback saw replacement prop Thomas Gallo cross for a brace of tries, which were both converted by Emiliano Boffelli, who also slotted a penalty.

The opening exchanges were evenly contested with both teams awarded kickable penalties, though both Boffelli and Cooper were off target with their shots at goal.

The Wallabies eventually took the lead in the 10th minute courtesy of a penalty from Cooper after the Pumas were blown up for illegal scrummaging.

There was some enterprising play from both teams over the next 15 minutes as they gave the ball plenty of air, but poor option-taking and unforced errors meant no points were scored.

The match came alive in the 27th minute when Argentina were reduced to 14 men after Tomás Lavanini was yellow-carded for taking out Izack Rodda illegally at a lineout.

Reece Hodge put the ball into touch and from the resulting lineout, the Wallabies launched a drive before Fainga'a peeled off and crashed over for the opening try.

Five minutes later, Australia were on the attack again at a lineout midway between Argentina's 22 and the halfway line and from the set-piece, Fainga'a and Rob Valetini combined brilliantly before the latter threw an inside pass to Kellaway, who had an easy run-in for the score.

Despite their numerical disadvantage, Argentina finished the half stronger and spent the last five minutes camped inside Wallabies territory. They could not cross the whitewash, however, and had to settle for a Boffelli penalty which meant Australia held a 15-3 lead at half-time.

The Wallabies drew first blood in the second half when, three minutes after the restart, Kerevi ran onto a well-timed pass from Cooper before barging over for his side's third try.

Ten minutes later, Kellaway found himself in space out wide inside Argentina's 22 and he did well to shrug off a tackle from Santiago Chocobares before crossing for his second five-pointer.

The Wallabies were flying now and just before the hour-mark Len Ikitau did brilliantly to draw in a couple of defenders before offloading to Kellaway, who cantered in for his third try.

With the game in the bag, the Wallabies took their foot off the pedal during the final quarter, allowing the Pumas to come back strongly and finish with a flurry.

In the 63rd minute, Argentina set up several phases close to Australia's try line before replacement prop Gallo, who was making his Test debut, burrowed his way over for the score.

That try seemed to reinvigorate the Pumas and in the 73rd minute, they were rewarded again when Gallo dotted down again in similar fashion to his previous effort from close quarters.

Those tries gave some respectability to the final score and although Australia finished the contest with 14 men after their captain Michael Hooper was yellow-carded for a professional foul on defence, they managed to keep Argentina at bay during the game's dying moments, and, in doing so, secure the bonus-point victory. 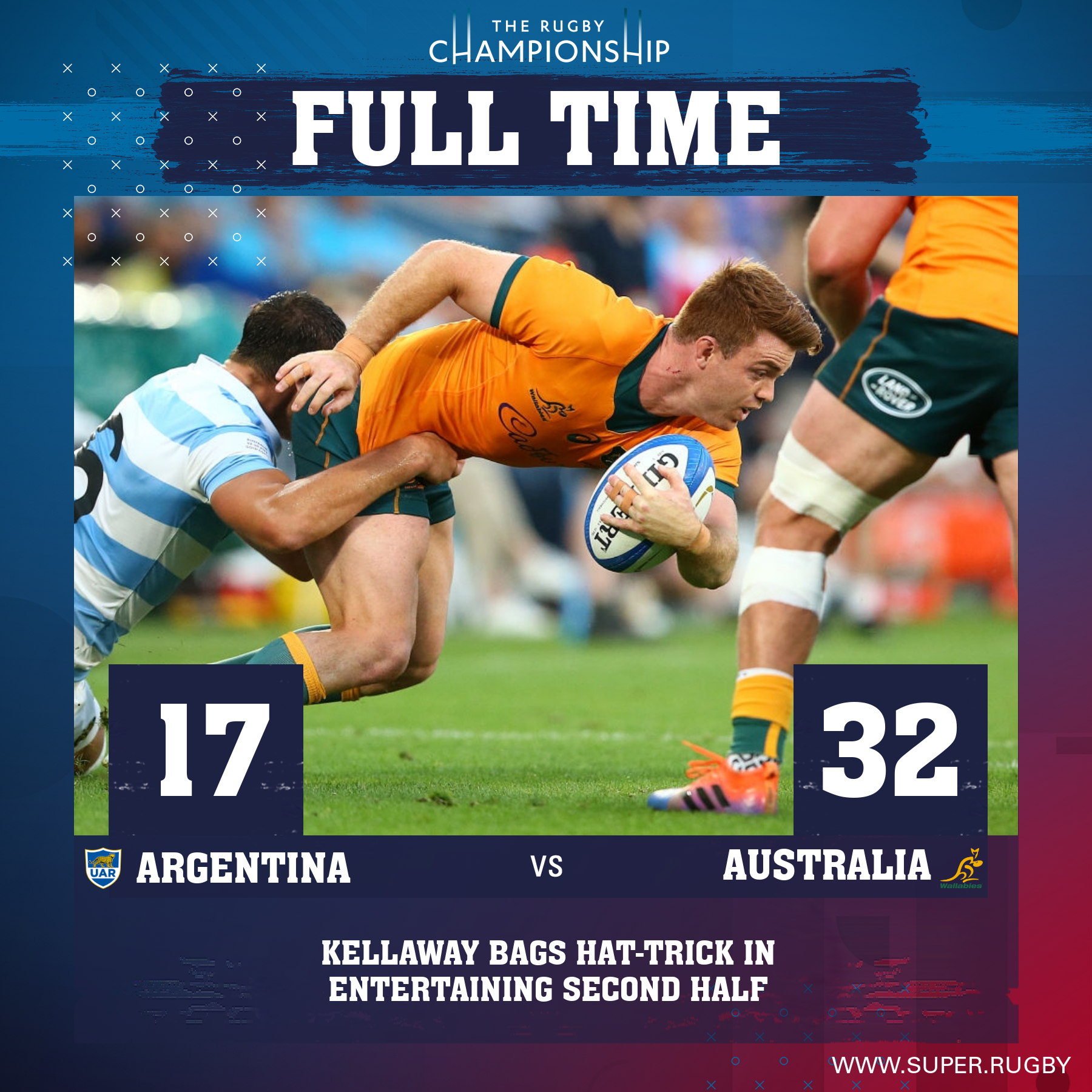