Ireland ensured it was a clean sweep by Northern Hemisphere teams on the final weekend of year-end Tests by beating Argentina 53-7 in Dublin.

The seven tries to one win over a Los Pumas team reduced to 14 players for the last half-hour meant no Southern Hemisphere won in the year’s final round of internationals. For Ireland – who also beat New Zealand last week – it was a dominant performance that put the seal on an impressive November campaign.

Two tries from Josh van der Flier helped a ruthless Ireland to round off their year with an eighth successive Test victory.

The hosts showed few signs of a hangover from their impressive 29-20 win over New Zealand last weekend running in seven tries – man of the match Joey Carbery contributing 18 points with the boot.

The Pumas – so often Ireland’s bogey side at the World Cup but winless in all 10 of their Tests in Dublin – were already well behind when Tomas Lavanini was red-carded close to the hour mark.

The Pumas bit first, a fine counter-attack ending with Matteo Carreras jinking in off his wing and touching down – Emiliano Boffelli converting for 7-0 after three minutes.

Carbery put Ireland on the board with a penalty in the sixth minute.

The hosts moved ahead in the 12th minute as van der Flier was bundled over the line – Carbery adding the conversion for 10-7.

The Pumas bright start was ruined by constant ill discipline which cost them dearly in terms of territory and possession and prompted referee Matthew Carley to warn Argentina captain Julian Montoya that a yellow card was in the offing.

The Irish punished the visitors even without Carley wielding a yellow card as prop Andrew Porter went over under the posts. 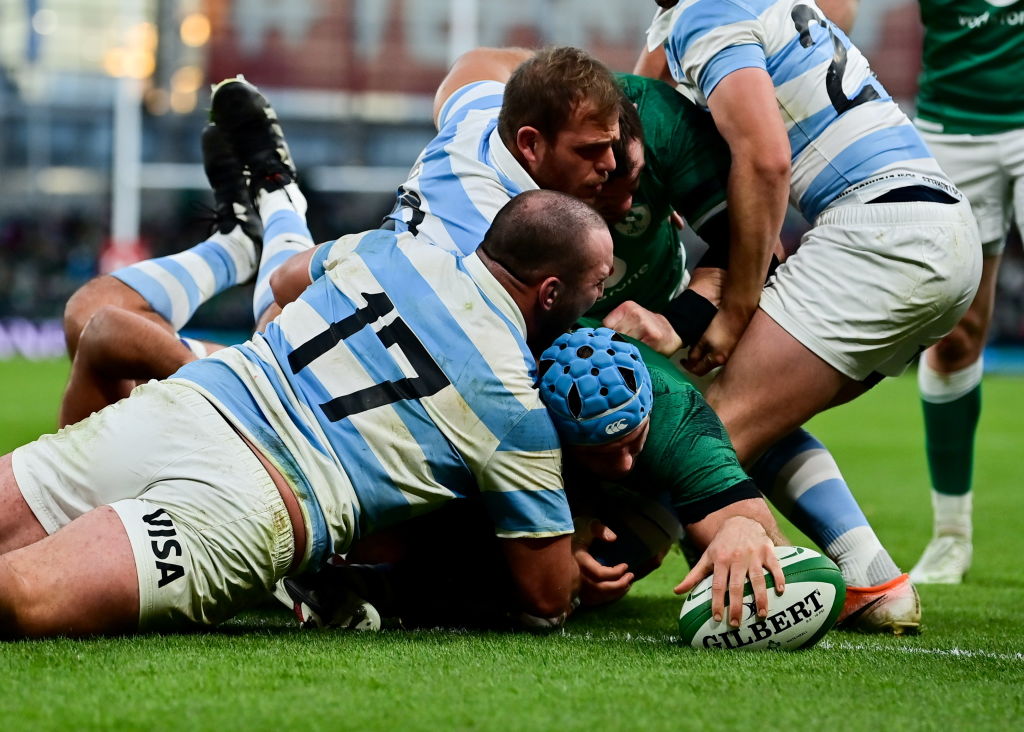 Carbery converted for 17-7 with 23 minutes on the clock.

Boffelli should have reduced the deficit soon after but he sent his penalty wide from in front of the posts.

The fullback missed another penalty shortly after and the Pumas missed yet another chance when Carreras went clear after a delightful side-step but dropped the ball in sight of the line.

Instead, it was the hosts who scored as a great take by Lowe inside Pumas territory set up the attack which led to Caelan Doris going over – Carbery converting for 24-7 with two minutes of the half remaining.

One cause for concern for the hosts was they would have to play the second-half without skipper James Ryan who failed a Head Injury Assessment.

The visitors’ frustration boiled over as Pablo Matera’s 80th cap took a wrong turn as he was sent to the sin bin for a deliberate knock-on.

Carbery knocked over the penalty for 27-7 with half an hour remaining.

Farrell decided the gap was sufficient at that point to send on a fresh halfback pairing with Harry Byrne in at flyhalf – Carbery staying on but going to fullback – and Craig Casey on as scrumhalf for Conor Murray.

It did not disrupt their rhythm as van der Flier went over from close in for his second try – Carbery converting for 34-7.

The Pumas’ task became mission impossible just before the hour mark when Lavanini was red carded for the third time in his Test career after charging in with his shoulder and connecting with Cian Healy’s neck.

The Irish turned the screw ruthlessly with further tries from young replacement hooker Dan Sheehan and 34-year-old Healy before Tadhg Beirne scored the final try in the corner.