Pumas Beaten by Scotland in Close One

Scotland returned to the victory trail when they claimed a 14-9 triumph over Argentina in their November Test at Murrayfield.

In a tightly contested encounter, the home side had to dig deep to secure their win but they eventually took control of proceedings and outscored the Pumas by one try to none.

Both sides were guilty of committing numerous mistakes but Argentina were the architects of their downfall as poor goalkicking – they missed four penalty attempts – led to their loss.

The opening exchanges were characterised by plenty of running and some unforced errors from both sides. Greig Laidlaw opened the scoring with a well-taken penalty in the fourth minute before Nicolas Sanchez had a chance to draw his side level five minutes later, but his shot at goal was wide of the mark.

The next 15 minutes was an arm wrestle as the sides tried to gain the upper hand but there was little interesting to report during that period.

In the 22nd minute, Emiliano Boffelli lined up a long range penalty, from just inside Scotland’s half, but like Sanchez’s earlier effort, his kick was also off target which meant Scotland were still clinging to their 3-0 lead.

The next 10 minutes saw the Pumas doing most of the attacking and they finally opened their account in the 28th minute when Sanchez landed a penalty after Adam Hastings was blown up for holding onto the ball on the ground.

Four minutes later, Scotland regained their three-point lead via another penalty from Laidlaw when Sanchez infringed at a breakdown. There was little to report during the rest of the half which petered out and Scotland went into the sheds at half-time with a slender 6-3 lead.

Argentina drew first blood in the second-half courtesy of another Sanchez penalty, two minutes after the restart, after Hastings went off his feet at a ruck. Five minutes later, Sanchez had a chance to give his side the lead for the first time but, once again, he failed to convert his penalty attempt.

That miss proved costly as Laidlaw put Scotland back in front when he added his third penalty in the 54th minute after Agustin Creevy punished for a high tackle on Huw Jones.

That kick gave Scotland some breathing space and they soon upped the ante on attack. And in the 64th minute, they were rewarded when Sean Maitland crossed for a deserved try after running onto a pass from Stuart Hogg inside the Pumas’ 22.

Laidlaw’s conversion attempt struck and upright before Sanchez lined up another shot at goal off the kicking tee, three minutes later, but he pulled his effort wide of the mark for the third time.

Three minutes later, Argentina won a scrum penalty deep inside Scotland’s 22 and this time Sanchez was successful off the tee which meant his side were trailing by five points on the scoreboard.

Scotland finished stronger, however, and although Laidlaw also missed a penalty in the game’s closing stages, they held on to clinch their fifth successive victory over the Pumas. 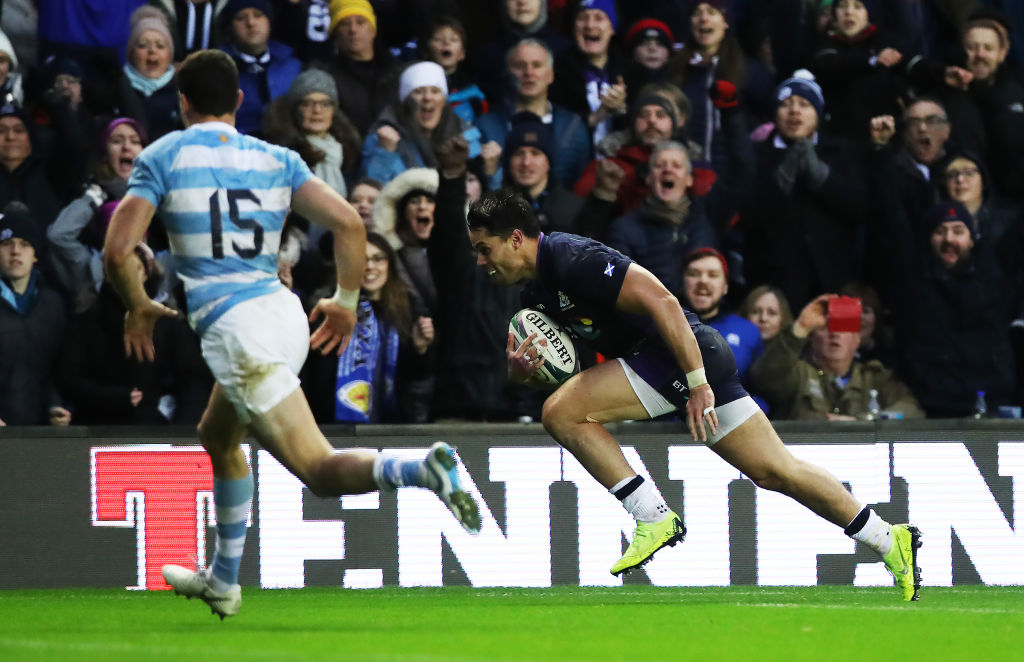