South Africa were rarely troubled as they cruised to a 32-12 victory over Argentina in their Rugby Championship opener at the Nelson Mandela Bay Stadium on Saturday.

The Boks went into the half-time break leading 21-9 thanks to two tries, two penalties and one conversion, with all of Argentina's points coming from penalties.

And the home side saw out the second half with relative ease, putting a further gloss on the scoreline in the 80th minute through debutant Jaden Hendrikse.

The Springboks claimed first blood after just one minute of play as Elton Jantjies converted a penalty from about 40 meters out after Argentina were penalised for not rolling away from the ball.

Both teams were showing a real willingness to run with the ball, and after a bit of back and forth between the two teams, the hosts stretched further ahead on 14 minutes, Cobus Reinach intercepting a poor pass before racing 60 meters upfield for a try. Jantjies added the extras as South Africa stretched their lead to 10-0.

The Pumas were quick to post a response, though, reducing the deficit through Nicolas Sanchez's penalty in the 19th minute.

But any hopes of drawing level were dealt a serious blow a few minutes later as the hosts bagged another try. Jantjies was the architect, finding Aphelele Fassi with a pinpoint cross-kick, leaving the winger with a simple task in the left-hand corner. Jantjies failed to add the extras, but he would soon make amends with a successful penalty kick to make it 18-3 to the home side.

The Springboks had another chance to add a further three points in the 24th minute but the chance came to nothing as Frans Steyn failed to find the target with a kick from distance.

After a brief lull in play, Argentina managed to claw back another three points, with Sanchez making no mistake from about 35 meters out.

South Africa hit back just two minutes later, though, as Jantjies slotted a penalty kick after Argentina's ball carrier was adjudged to have played the ball after being tackled.

But it was the visitors who had the last say before the half-time whistle sounded out, Sanchez again converting a penalty to make it 21-9 at the break.

The visitors picked up where they left off after the break as Sanchez again slotted a penalty to bring his side within nine points of the hosts.

Despite the bright start by Argentina, the hosts were quick to reclaim control of proceedings. Jantjies converted two more penalties to give the home side a 15-point cushion as the match entered the final 20-minute spell.

The Pumas were unable to find a way past a staunch Springbok defence and after successfully rebuffing the advances of the visitors, South Africa rubbed salt in the wounds of their opponents by extending their advantage at the death. Marco van Staden created the chance with a powerful run from the maul, finding debutant Hendrikse for a straightforward finish, with Steyn kicking the conversion attempt wide of the mark. 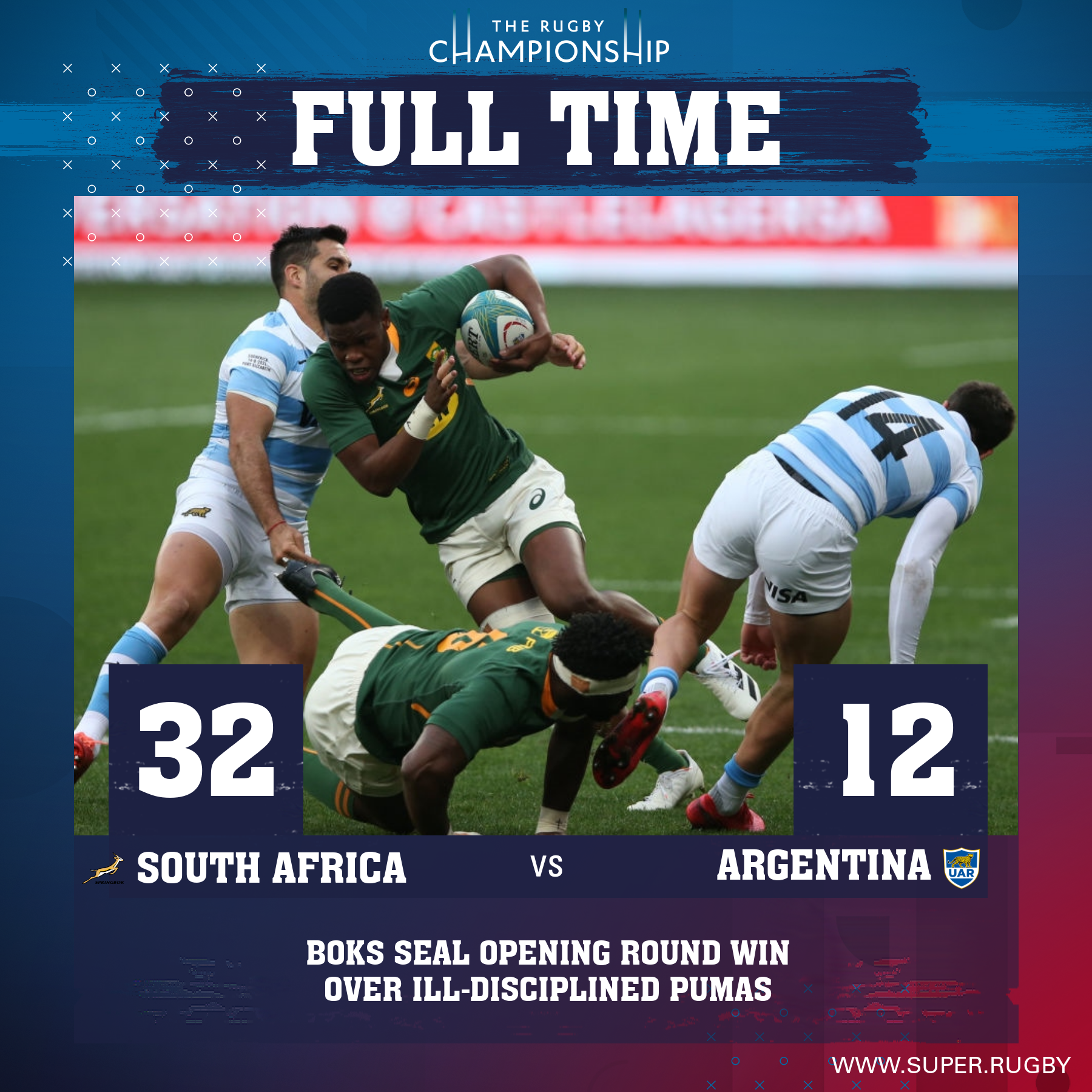