The Springboks and Pumas have both made changes to their match day squads as the Argentineans look to bounce back after Round #1 loss.

Springbok coach Jacques Nienaber has made wholesale changes to the team for the second Castle Lager Rugby Championship Test against Argentina, while Lood de Jager will run out for his 50th cap, Marvin Orie will earn his first Test start and the uncapped Nicolaas Janse van Rensburg has been named on the replacements bench.

The starting team shows 11 changes from last week – six in the backline and five upfront – with Nienaber bringing back a host of players who featured in the recent series win over the British & Irish Lions.

In total, the match-23 shows 17 changes from the squad that beat the Pumas 32-12 in the opening match last Saturday. The only players who will start again this weekend are De Jager (lock), Siya Kolisi (captain and flank), Jasper Wiese (No 8), and Cobus Reinach (scrumhalf).

Reinach will start in the same backline that secured the Castle Lager Lions Series win in the final Test against the British & Irish Lions two weeks ago, which sees Handré Pollard back at flyhalf, Damian de Allende and Lukhanyo Am return to the midfield, and Makazole Mapimpi, Cheslin Kolbe (wings) and Willie le Roux (fullback) at their posts in the back three.

Orie, who has made all five of his Test appearances off the bench, as well as Malcolm Marx (hooker) and Trevor Nyakane (prop) have been promoted to the starting team, where Thomas du Toit (prop) will also start his first Test of the season.

The only change in the loose trio is at flank, where Franco Mostert steps in for Kwagga Smith, who moves to the bench in place of the injured Marco van Staden.

“A few players didn’t play last week after a physically demanding Castle Lager Lions Series, and are now back in the mix, while we also wanted to give a few players who have worked hard at training over the last two months a chance to get some valuable game time,” said Nienaber. 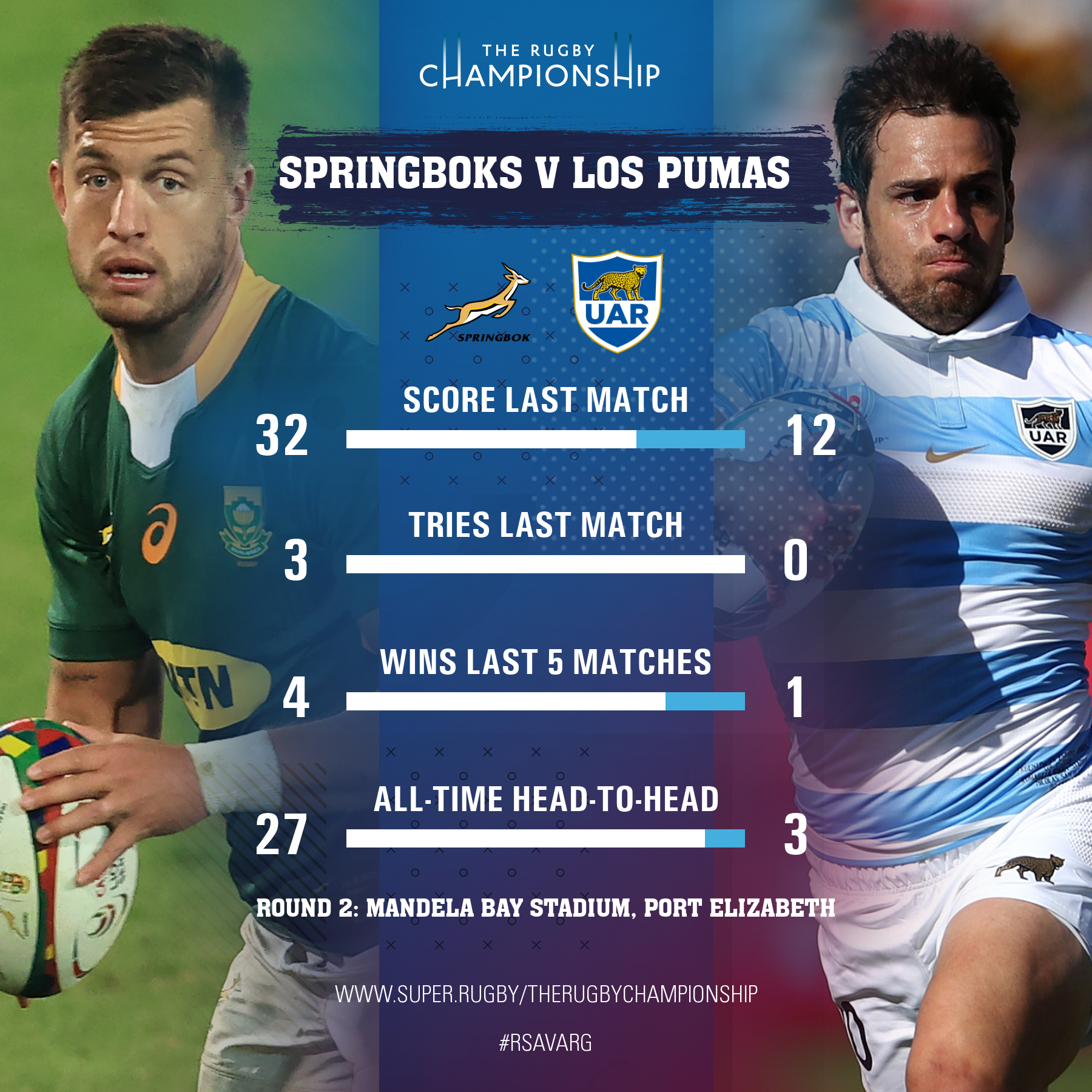 “This is a long season, so we need to get the balance right between building consistency in selection and in our performances, managing the players in terms of their workload, and building depth within our squad.”

Zoning in on the fixture, Nienaber said they are expecting Argentina to come out firing this week.

“Argentina will come hard at us, so we know we need to perform much better than last week to get the desired result,” he said.

“While we were pleased with the victory and to start our Castle Lager Rugby Championship campaign on a winning note, there was a lot of room for improvement in our performance. We’ve identified a few areas we need to work on if we want to defend our title successfully, and we will work on those aspects of our game at training this week" he added.

Pumas coach Mario Ledesma has decided to rotate his squad and only the midfield pairing, front row and two of the three loose forwards are in their same positions as last Saturday, while there are two positional switches.

Apart from the two midfielders, Santiago Chocobares and Jeronimo de la Fuente, the entire backline is different from last weekend, with Santiago Carreras moving from fullback to left wing, while Bautista Delguy, Matias Moroni (injured), Nicolas Sanchez and Felipe Ezcurra drop out of the starting team.

They are replaced by Juan Cruz Mallía at fullback, the uncapped Ignacio Mendy at right wing, Domingo Miotti at flyhalf, and Gonzalo Bertranou at scrumhalf. Sanchez and Ezcurra are on the bench this week.

Upfront, Facundo Isa (flanker) drops out of the match-day squad while Marcos Kremer moves to the bench. Guido Petti moves from lock to flanker, with Tomas Lavanini and Matias Alemanno named to start in the engine room.

Apart from Mendy, one other uncapped player has been included on the bench in outside back Lucio Cinti. Both these speedsters were part of the Argentinean sevens team at the recent Olympic Games in Tokyo, where they beat the Blitzboks in the quarter-finals and ended up winning the bronze medal.