The Wallabies were stunned early on as Pablo Matera and the Pumas struck first, taking a quick 10-3 lead.

A penalty try and a yellow card to lock Matías Alemanno in the second half proved the key turning point as the visitors charged into the lead thanks to dominant showings from man of the match Rob Valetini and Folau Fainga'a.

Len Ikitau's late try helped seal the bonus point and the win for the Wallabies, although it came at a cost with the loss of Quade Cooper to a suspected lower leg injury.

Cooper was arguably the Wallabies' best in the first half as Pablo Matera opened the scoring for the Pumas in the fifth minute.

The returning flyhalf made his mark instantly as he nailed a penalty, before Emiliano Boffelli hit back with two of his own.

Needing a response, Cooper came up with a piece of magic, drawing the defenders in before finding Jordan Petaia as the winger dived over the line to reduce the margin.

Dave Rennie’s men continued to go onto the attack, however a lack of execution and a growing penalty stifled their opportunities.

Cooper continued his strong first half as he burst through the line, before a loose pass brought them undone.

Five minutes later, the Japanese-based flyhalf stepped and went close, however, a trademark flick hit James Slipper in the head and caused the turnover.

This allowed Boffelli to add his third penalty of the night as they fed off a strong crowd in Mendoza.

Some excellent work from Darcy Swain at the rolling maul shut down a threatening attack from Los Pumas, before Boffelli’s fourth gave the hosts a 19-10 lead at the break.

Needing a spark, some exciting interchange between Tom Wright and Jordan Petaia almost produced a try, before they were stung by the loss of Cooper.

The injury failed to stop their momentum as Fraser McReight stepped up in Michael Hooper’s absence to dive over the line.

With the visitors on the attack, Argentina produced some exciting counter-attack to break open the game, with Juan Martín González Samso finishing off in the corner.

They eventually got the opportunity they deserved when the forwards combined for a penalty try from the rolling maul.

Lock Matías Alemanno was yellow carded as a result, with the long boot of Reece Hodge’s putting the Wallabies in front for the first time in the game.

With the hosts still down a man, Folau Fainga’a capped off his strong performance with a trademark try from the rolling maul to push the lead past a converted try.

It set up a remarkable finish with the result well and truly secured as both teams hunted for a bonus point; Argentina a losing one and a three-try bonus point for the Wallabies.

Both teams decided to throw the ball around at will with players gassed as Nick Frost somehow won the race to a kick, before Hunter Paisami and Len Ikitau connected to cap off an incredible win.

“I thought we were far more clinical (in the second half), we applied a lot more pressure…really happy with how we finished,” coach Dave Rennie said after the match.

“We battled to do that consistently against the English so it’s a start but we have more in us but really happy with the character, we had a couple of late changes and loosing a key guy within the game.

“That’s the thing about this group, there’s a lot of character and courage and they stood up.” 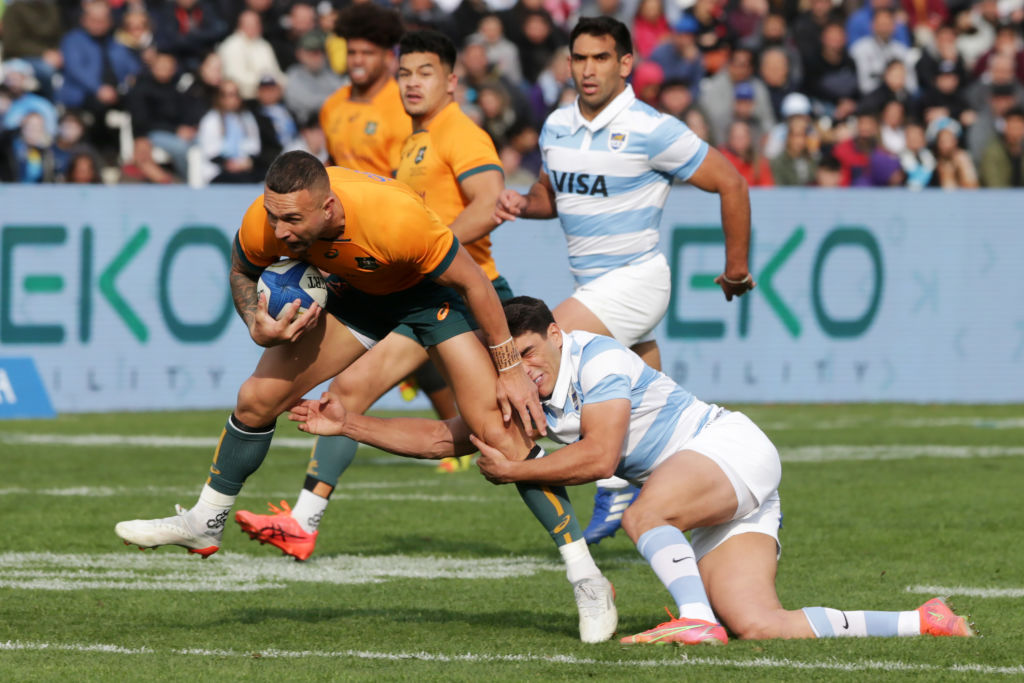