Argentina have recorded their largest win ever as they beat the Wallabies 48-17 in San Juan.

After a fortnight full of setbacks, the toll really seemed to show on Dave Rennie's men as they were outclassed and out-energised for the full 80 minutes.

Rob Valetini was the shining light in the defeat as he set up the first try to James Slipper before the hosts ran away with the contest.

Argentina capitalised on an inability to shut down the high ball and some disappointing defence to record the bonus-point win.

“We conceded four tries with kicks in-between us and got dominated in the collision area. We created plenty of opportunities but we have to be patient and our rucks not a disaster.

The Wallabies were immediately put on the back foot as miscommunication between Jordan Petaia and Tom Wright gifted Juan Imhoff a try in the first minute.

Captain James Slipper steadied the ship for the visitors, diving over the line after a great run from Valetini.

With the visitors slowly finding their way back into the contest, returning flyhalf James O’Connor looked to have given them the lead as he dived over, however, it was brought back for an illegal cleanout.

This proved a key turning point as Argentina marched down the field and scored four minutes later via Jerónimo de la Fuente.

Some nice interchange between Len Ikitau and Lalakai Foketi put the visitors back on the attack, however, the high ball dramas came back to haunt them as the hosts continued to build pressure.

This allowed Juan Martín González Samso to score his second try in two games after a favourable bounce from a midfield kick.

Emiliano Boffelli looked to have capped off a dream first half with their fifth try of the game from yet another bomb before a great tackle from Marika Koroibete forced the mistake, keeping the lead at 26-10 heading into the changerooms.

The Wallabies started the second half strong as Valetini continued his brilliant game with a brutal run, only for Jordan Petaia to be stopped on the line.

Both teams hunted for an answer as Argentina continued to threaten, with the visitors' defence holding on.

In the end, a double to Gallo and a yellow card to Fraser McReight helped Los Pumas extend the advantage to the delight of the San Juan crowd.

However, Argentina proved too strong as they denied a pair of late attacks to secure the bonus point win, with Boffelli and Tomas Albornoz scoring two late tries to seal the win. 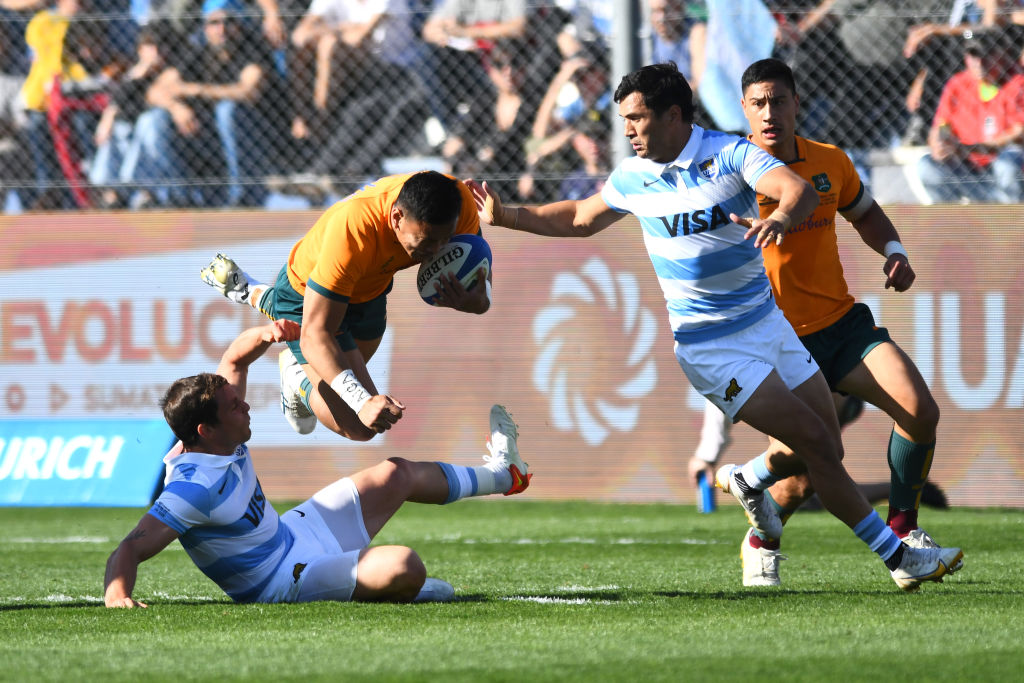