A determined defensive effort and passionate commitment in Christchurch has seen Pumas defeat All Blacks 25-18.

Argentina made history Saturday with a stunning 25-18 Rugby Championship win over New Zealand in Christchurch.

Playing with passion and physicality, the Pumas won the battle of the breakdown and benefited with 20 points from the boot of wing Emiliano Boffelli to lodge just their second win over the All Blacks and their first on New Zealand.

It was a win that puts Argentina right in the hunt to claim their first Rugby Championship, especially with Australia having beaten South Africa earlier in the day. Argentina and Australia have nine points each. The All Blacks have five points, and South Africa four.

Try as the All Blacks might, with long phases of 17 recycles at times, and veteran lock Sam Whitelock, No8 Ardie Savea, second five-eighths David Havili et al, charging at the line, they were unable to penetrate the determined Argentine tacklers, spread across the field.

Instead it was the Crusaders loose forward Pablo Matera, hooker, captain and turnover maestro Julian Montoya, and goal-kicker Emiliano Boffelli, who landed six penalty goals and the conversion who spearheaded the Argentina effort. The effort went in across the field.

Flanker Marcos Kremer made 26 tackles, Montoya 21 and second five-eighths Matias Orlando 18 as Argentina made 195 tackles to 87 by the All Blacks.

Ironically, for a team with one of the most feared scrums in the world, Argentina were unable to claim any dominance in that department, but it didn't matter, they competed in the lineouts and put the pressure on through that avenue, and in their defence.

That was highlighted in the last two minutes when desperation saw replacement hooker Codie Taylor fail to throw straight 10m out from Argentina's line.

That spelled the end for the All Blacks who should have made more of their chances in the first half, in which they led 15-12.

Mistakes, and penalty concessions, niggled the All Blacks and when they might have hoped their fitness would bring them home, they ran into Argentinian fervour when they had history in the grip.

Argentina made the stronger start to the second half, capitalising on a re-start after a penalty goal landed by first five-eighths Richie Mo'unga.

Lock Scott Barrett was unable to hold the restart. Lurking to take the ball was blindside flanker Juan Martin Gonzalez and he ran around into space on the short side and sped through for a try to allow Boffelli to land a sideline conversion to regain the lead.

Another penalty was conceded in the 57th minute and Boffelli landed another goal to give Argentina a 22-18 lead.

Eight penalties conceded in the first half, four of them in goal-kicking range for wing Emiliano Boffelli, denied the All Blacks the ability to build momentum. The sides were competitive but the All Blacks showed their attacking ability with the forward pack piecing together an outstanding driving maul to get hooker Samisoni Taukei'aho over in the 10th minute.

Then, with the Argentine lineout, which had been operating at 93 per cent against Australia, under pressure and conceding two throws, it was Taukei'aho who covered a poor Pumas throw to get the ball moving.

Mo'unga found Havili and centre Rieko Ioane, and he drew the defence to slip a short pass to fullback Jordie Barrett. He linked with wing Caleb Clarke and he ran in the second try.

The All Blacks showed the power they could harness when driving, including one 17 phase effort that sapped the Argentine defence. It also helped that the strength of the All Blacks scrum saw the less experienced Ethan de Groot and Tyrel Lomax defang the experienced Pumas scrum.

Up 15-12 at halftime, the All Blacks could reflect on a competitive start again, but lost opportunities due to that 8-5 penalty count.

The home side, who squandered an early 15-6 lead, have now lost six of their last eight Tests and can expect more severe criticism after the pressure had eased following their defeat of the Springboks in Johannesburg. 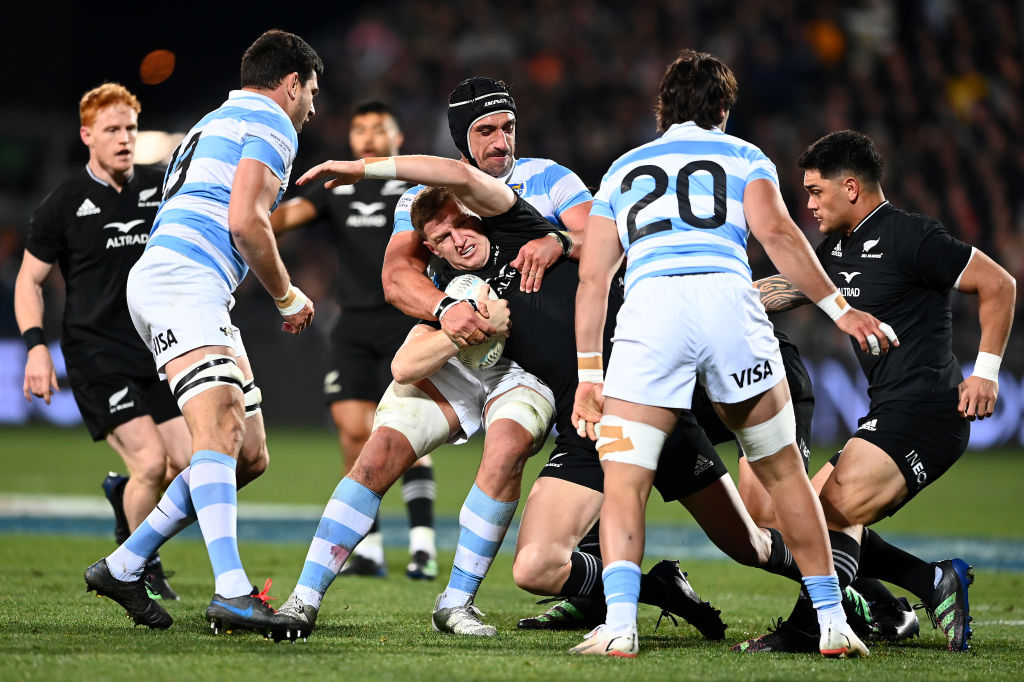 Strong second half defence by the Pumas denied the All Blacks any real scoring opportunities.