All Blacks make minimum changes while Pumas strengthen the bench for the clash at Christchurch.

All Blacks selectors Ian Foster, Joe Schmidt and Jason Ryan have announced the match-day 23 for the Lipovitan-D Rugby Championship Test against Argentina at Orangetheory Stadium in Christchurch.

One change has been made to the team that played in Johannesburg, with the uncapped Stephen Perofeta in line to make his Test debut as first five-eighths cover. Richie Mo’unga remains in the run-on side while Beauden Barrett has been made unavailable due to a neck injury sustained at training.

The rest of the side remains unchanged, providing an opportunity to build on combinations. That includes the front row group of Ethan de Groot, Samisoni Taukei’aho and Tyrel Lomax. George Bower, Codie Taylor and Fletcher Newell will again provide cover.

The All Blacks are excited by their first trip to Christchurch since 2016.

“It’s great for us to be able to return to Christchurch,” Foster said. “The All Blacks have such a rich history here and it’s exciting to build on that.

“The recent form of Argentina makes this a Test one that we are looking forward to. And the fact that the Lipovitan-D Rugby Championship is incredibly even means this Test is vital to us.”

Saturday will see a special milestone achieved by one of the team’s key players. New Zealand’s most capped international halfback, Aaron Smith (107), will mark his 100thTest start when the sides kick off their Lipovitan-D Rugby Championship clash.

Argentina is set to play in New Zealand for the first time since 2018. The All Blacks have played them 37 times since 1976, while this will be just the third meeting between the sides in Christchurch. 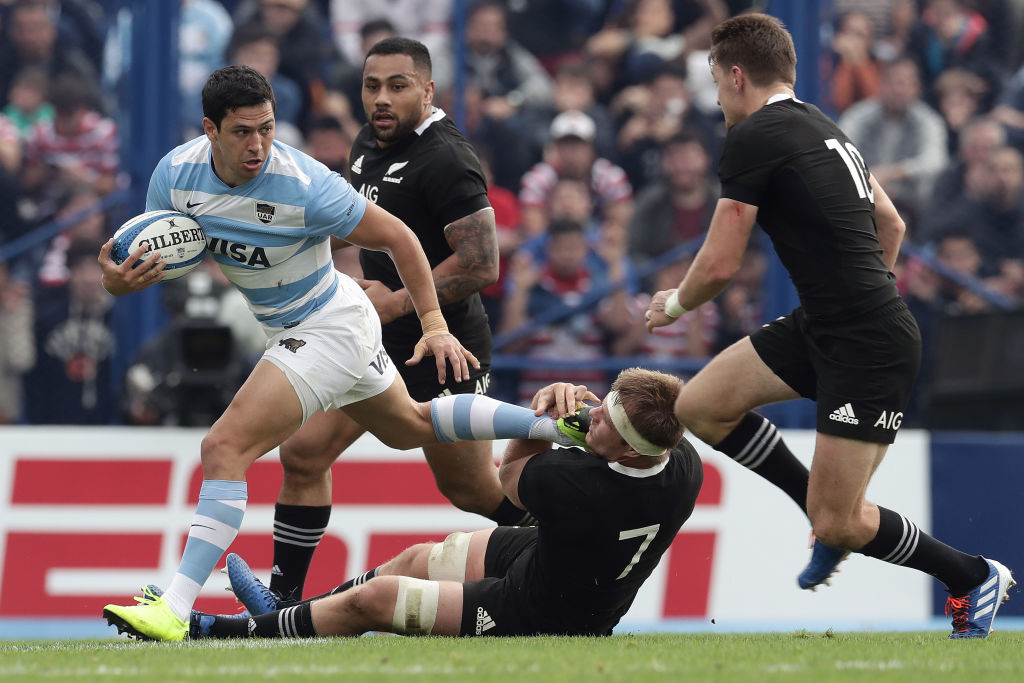 Centre Matias Moroni is back in the Pumas starting XV.

Argentina coach Michael Cheika on Thursday unveiled a bulked-up backline as he made three starting changes to his team to face New Zealand in their Rugby Championship Test in Christchurch.

Cheika also overhauled his replacements bench as he looks to retain the winning formula following his side’s 48-17 demolition of Australia at San Juan 12 days ago.

All three starting changes were enforced, with Cheika opting not to bring a handful of experienced players to New Zealand for the two-Test assignment.

Seasoned backs Juan Imhoff and Jeronimo de la Fuente are both missing from the side who beat the Wallabies, along with starting prop Francisco Gomez Kodela.

The inexperienced Lucio Cinti comes onto the left wing for Imhoff while 60-Test outside back Matias Moroni is restored in place of the injured De la Fuente, reuniting with long-time midfield colleague Matias Orlando.

Cinti and Moroni are both sizeable backs, something Cheika said would be important to counter the All Blacks midfield.

“New Zealand have a big backline, so we’ve got some big players there to maybe counter that,” he told journalists Thursday.

“This team is a combination of what we saw from the last game and the chance to see a few different things.

“It’s good competition at the moment, there’s lots of difficult [selection] duels and there will be a lot of new energy from the finishing team.”

Up front, Joel Sclavi starts at tighthead prop while Cheika has changed all five forwards on his bench.

Veteran front-row forwards Augustin Creevy and Nahuel Tetaz Chaparro were among the replacements against Australia but have not been picked to tour, instead returning to their clubs in Europe.