New Zealand took full revenge for their previous loss to Argentina by scoring half-century of points.

Redemption rugby from the All Blacks paralysed Argentina who were denied any sniff of opportunity in a seven try 53-3 win for New Zealand in the Lipovitan-D Rugby Championship Test in Hamilton on Saturday.

Wet weather rugby from the All Blacks, pressure applied through kick-chasing and superior offensive tackling unsettled Argentina. They were a shadow of the side that won the first Test, lacking the intensity in the face of a committed home side.

Improved discipline also denied Argentina the goal-kicking chances of the first Test while there was more dominance at the breakdown.

The scene was set at the outset when in front of his posts lock Tomas Lavinini dropped the ball and Argentina conceded an early penalty. And things never improved.

It was a game that saw captain Sam Cane lead from the front with his best game of the season while evidence of a maturing midfield combination between second five-eighths David Havili and centre Rieko Ioane could not have been more obvious.

Havili was the back room master, doing the nuts and bolts work that freed up Ioane to show his best attacking intent.

But the pack were not to be outshone, hooker Samisoni Taukei'aho and his front row allies try scoring Ethan de Groot and Tyrell Lomax were superb while blindside flanker Shannon Frizell was much more of the enforcer the All Blacks have lacked.

The option-taking was vastly improved. Applying short chip and grubber kicks, the All Blacks turned Argentine around often and they showed their discomfort. No.8 Pablo Matera was a battler for his side but his record-equalling 15th Test appearance for Argentina against the All Blacks was not a night to remember.

Nine minutes into the half, wing Will Jordan and centre Rieko Ioane contested a kick to take the ball forward. Ioane had a second run to set up a quick ruck and de Groot was able to slide across the line on the back of his momentum on the wet ground.

Sixteen minutes into the game a chip kick from first five-eighths Richie Mo'unga was contested, with quick ball and a slick pass from flanker Sam Cane giving Ioane room, and time, to run in and out of wing Emiliano Boffelli to feed wing Caleb Clarke in for a try.

Argentina finally got some consistent ball in the second quarter, but dogged All Blacks defence confined the damage to a Boffelli penalty goal. 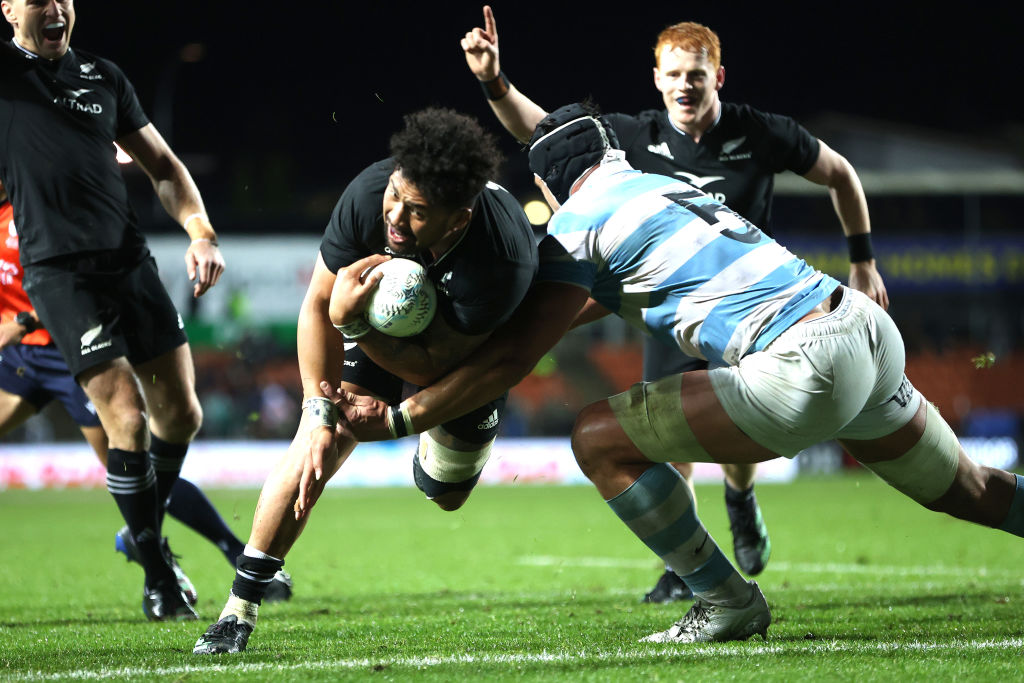 But as soon as the restart occurred, Jordan applied the pressure to the catcher and with quick forward support, a turnover was achieved and a penalty was tapped by the ever-present, and diligent, No8 Ardie Savea. It looked to produce a try for hooker Samisoni Taukei'aho, but it was ruled out for a knock-on, unluckily as it turned out, as an Argentina arm looked to knock the ball.

However, the All Blacks were under advantage, and with Lavanini sin-binned for foul play, they took a scrum and a powerful shove allowed Havili to slip the shortest of passes to Ioane, who had his reward for a good first half with a try under the posts.

Argentina threw everything into the third quarter, their only reward seeing replacement prop Fletcher Newell sent to the sin-bin. But that didn't stop the All Blacks who, gaining a scrum from another Argentina mistake, ran the ball, initially in helter-skelter fashion, but then straightened by, who else, than Ioane?

He raced 50 metres, and, in the tackle, passed back up to replacement halfback Finlay Christie. He moved the ball on with Cane twice prominent, including handing the final pass for fullback Jordie Barrett to score.

Another breakout saw Savea in his element and from a penalty lineout, he accepted a pass from replacement hooker Dane Coles to score.

Putting the icing on the cake was a determination after the final hooter had blown to work the ball under penalty pressure to in front of the Argentine posts. A scrum option was requested and acting skipper Savea ran off the back drawing the defence and replacement first five-eighths Beauden Barrett spied the gap and took it to score.

Mission accomplished with an 80-minute performance that was everything that had been asked for and keep Rugby Championship hopes alive.