The teams have been announced for the Tri Nations match #4 clash at McDonald Jones Stadium in Newcastle.

Wallabies coach Dave Rennie has made three changes to the starting XV for the side’s Tri Nations showdown against Argentina in Newcastle.

Veteran prop Scott Sio comes straight in for the injured James Slipper at loosehead prop, alongside hooker Brandon Paenga-Amosa and the damaging Taniela Tupou who starts for the third time this Test season in the number three jersey. Rob Simmons is set to play his 105th Test for the Wallabies at McDonald Jones Stadium, partnering the ever-improving Matt Philip in the second row.

The dynamic Ned Hanigan will start at blindside flanker in the third and final change to the starting team, joined in the back row by skipper Michael Hooper and impressive young number eight, Harry Wilson.

Scone-born Nic White will get his first chance to play for his country in the Hunter Valley, partnering with Reece Hodge who retains the number 10 jersey after steering the side to a win over New Zealand in Brisbane. Reds pair Hunter Paisami and Jordan Petaia get another chance to combine in the midfield, at inside and outside centre respectively.

After scoring with his first touch in international rugby, Tom Wright will again start on the wing with Marika Koroibete and Tom Banks rounding out an unchanged backline in Newcastle.

Folau Fainga’a and latest Test debutant Angus Bell will again be called upon as cover in the front row, along with Brumbies skipper Allan Alaalatoa. The versatile Rob Valetini will cover both the second and back row with Queensland captain Liam Wright the other forward cover.

Waratahs number nine Jake Gordon returns to the matchday 23 for the first time since Auckland and is joined by young playmaker Noah Lolesio and the electric Filipo Daugunu as the replacement backs.

Wallabies coach Dave Rennie said: “After being left out in our last Test we got the reaction we expected from Scott, his preparation this week has been excellent and his experience will be invaluable against Argentina.”

“As a group, we know respect is earned daily and understand the importance of backing up our last performance with another quality effort on Saturday night. The tournament is evenly poised and our fate is in our own hands. We saw how much passion Argentina play with in their performance last weekend and we’re excited by the challenge in Newcastle.” 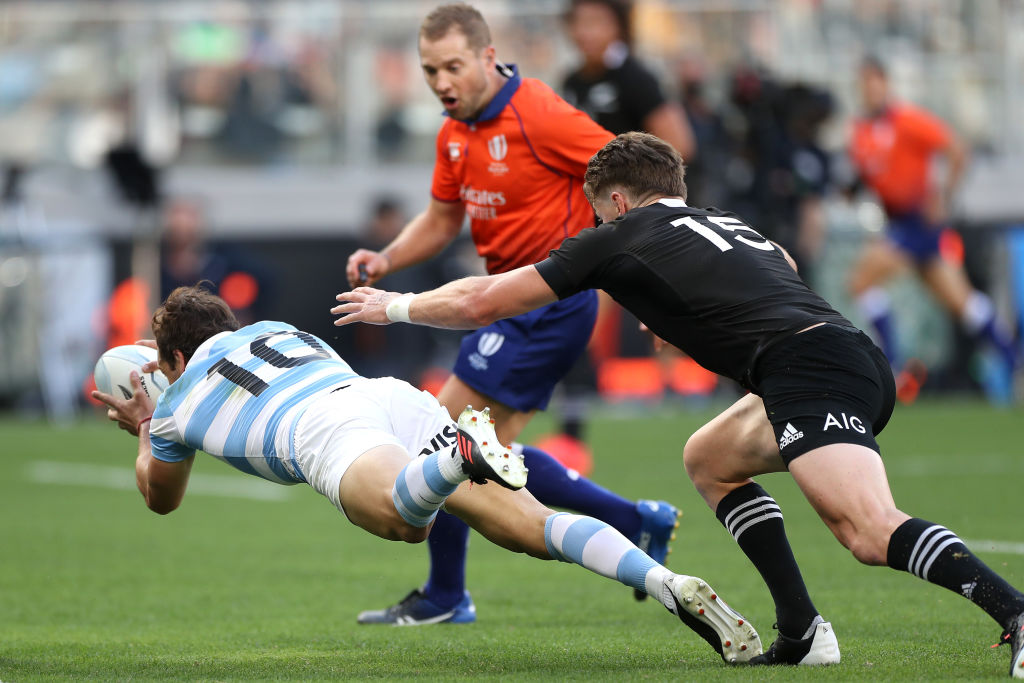 Los Pumas head coach Mario Ledesma has named an unchanged starting XV for the clash against the Wallabies in Newcastle. This rewards the team's superb performance against the All Blacks in their last match that saw them beat the Kiwis for the first time in their history.

The gargantuan backrow of captain Pablo Matera, Marcos Kremer and Rodrigo Bruni remains intact and will be a threat to the Wallabies. The outstanding lock pairing of Matias Alemanno and Guido Petti disrupted the All Black lineout and will be looking to do the same against the Wallabies.

Fly-half Nicolas Sanchez was close to being the best player against the All Blacks and has scored two tries and a total of 40 points across his last two Test appearances but has scored only one try in his previous 13 tests against Australia. However, he is a potent threat and will punish the Wallabies with his boot if they give away too many penalties. His partner in the halves os the experienced Tomas Cubelli who knows Australian rugby well after a stint at the Brumbies in Super Rugby.

* Due to injury the Pumas made a late change to their team following injury to scrum-half Tomas Cubelli. On the eve of the match it was announced that Gonzalo Bertranou would play at scrum-half with cover on the bench provided by Felip Ezcurra 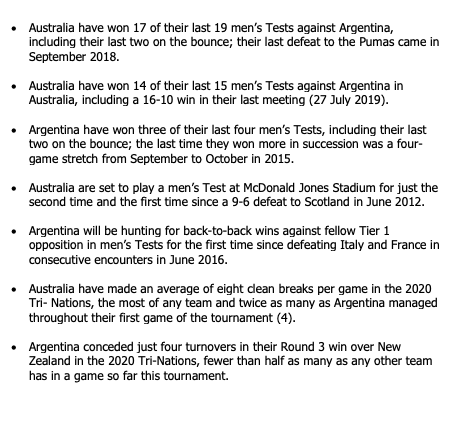