Australia won its third successive Test when it beat Argentina 27-8 in Townsville with the three tries to one victory moving them into second place on the standings.

Australia continued their impressive resurgence with a deserved Rugby Championship triumph over Argentina in Townsville. The home side were full value for their win, enjoying the bulk of the possession and territory and eventually outscoring the Pumas three tries to one as Reece Hodge, Samu Kerevi and Andrew Kellaway all dotted down.

Their other points came via two conversions and a penalty from Quade Cooper while James O'Connor also added a penalty and a conversion. For Argentina, Julian Montoya scored a try and Emiliano Boffelli succeeded with a penalty.

Argentina had an early chance to take the lead when Boffelli lined up a penalty in the fourth minute but his effort was off target.

That kick proved costly as shortly afterward Kerevi put his team on the front foot with a powerful run before his progress was halted by a thumping tackle from Santiago Carreras. The ball was recycled quickly to Hodge, however, and he did well to step past three defenders on his way over the whitewash.

The Wallabies continued to hold the upper hand and in the 19th minute, they were rewarded again when Kerevi crossed for his try. This, after Cooper delivered a teasing grubber kick inside Argentina's 22 which was gathered by Len Ikitau, who was brought to ground deep close to the posts and Kerevi regained possession at the ensuing ruck before dotting down.

From the restart, Rob Valetini was blown up for obstruction and Boffelli opened the visitors' account by slotting the resulting penalty.

The rest of the opening period was evenly contested with the Pumas becoming more competitive as the half progressed, although the Wallabies had a try disallowed when Nic White lost the ball while trying to dive over from close quarters in the 31st minute. Argentina committed a defensive indiscretion in the build-up and Cooper added his second penalty from in front of the posts which gave his team a 17-3 lead at half-time.

The South Americans were fastest out of the blocks in the second half and three minutes after the restart Montoya powered his way over the try-line, off the back of a lineout maul on the Wallabies' five-metre line.

Although Boffelli missed the conversion attempt, Argentina continued to have the better of the exchanges, but poor discipline from Marcos Kremer cost his team dearly when referee Matthew Carley had to overturn two Pumas penalties after foul play from the flanker.

First, it was for a no-arms hit on Marika Koroibete in the 47th minute and 10 minutes later Kremer was yellow-carded for a trip on Hodge deep inside Australian territory.

Despite playing with 14 men, Argentina were still competitive and an O'Connor penalty on the hour-mark was the only points scored during Kremer's stint in the sin bin.

The Wallabies finished stronger, however, and in the 70th minute Kellaway crossed for his side's third five-pointer after collecting a well-timed inside pass from O'Connor close to the Pumas try line.

That sealed the result for the home side and although they went in search of their fourth try, which would have secured them a bonus-point, they would not breach the Pumas defence again, although they will be happy with the result which takes them above South Africa into second position on the Rugby Championship table. 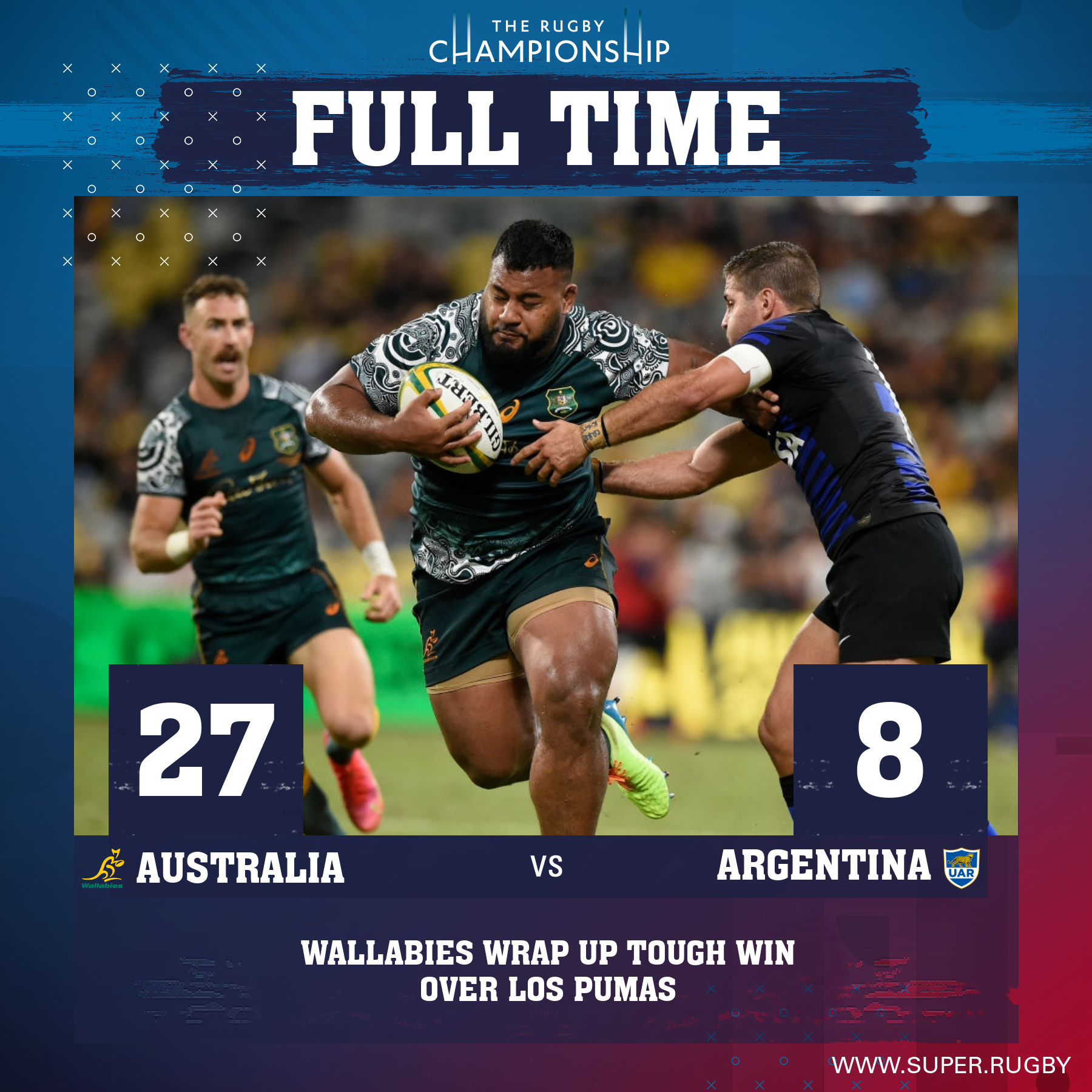