Suncorp Stadium has been a favourite hunting ground for the Wallabies but can the Pumas repeat last year's success in Australia?

Qantas Wallabies coach Michael Cheika has made five changes to his starting 15 and a further five to his reserves, ahead of Saturday night’s Mitsubishi Estate Rugby Championship clash with Argentina at Suncorp Stadium in Brisbane.

Scott Sio is the only change to the forward pack as the 55-Test veteran returns from a hamstring injury that forced him out of last weekend’s Test against South Africa.

Will Genia, Christian Lealiifano, Marika Koroibete and Kurtley Beale will all start in a new-look backline as combinations continue to be tested before the Rugby World Cup in Japan later this year.

Saturday’s clash will be a memorable occasion for Genia, with the halfback set to play his last-ever game at Suncorp Stadium following his decision to retire from Test Rugby at the end of 2019.

Suncorp Stadium has proved a happy hunting ground for the wily number 9, who currently boasts 10 wins from his 12 games in Wallaby Gold at the venue.

The Test against Argentina will also mark the inspirational return of Christian Lealiifano to the International arena. The 31-year old flyhalf last played for the Wallabies in June 2016 against England, and has now returned to top form following a battle with leukaemia.

Meanwhile it’s a homecoming for utility James O’Connor who is set to play his first Test in almost six years (2142 days) after being named amongst the reserves. O’Connor signed for the Queensland Reds last week but missed selection for the Test against South Africa.

Luke Jones is also in line to cap his Test return with the flanker to wear the Wallabies jersey for just the fourth time in career and for the first time since the 2014 Spring Tour.

Australia have lost just one of their last eight games against Argentina, although that defeat came on home soil last year on the Gold Coast.

The Wallabies exacted some revenge in the return fixture after recording the biggest come-from-behind victory in tier-one Test history to secure a 45-34 victory in Salta, Argentina. 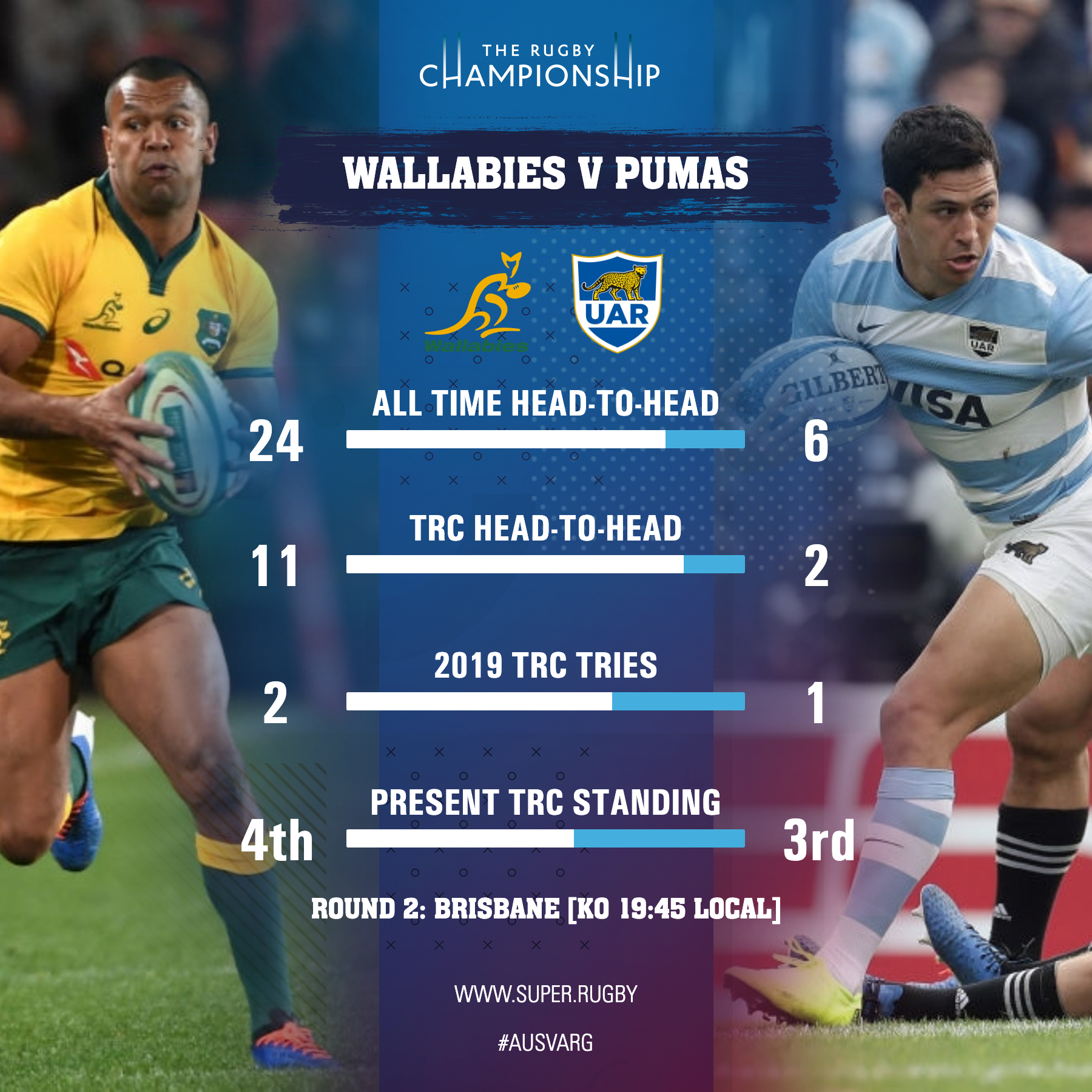 After Wednesday's training in Sydney, Pumas' Head Coach Mario Ledesma announced the match day squad for the game against Australia for the second round of the Rugby Championship. The team trained at Coogee Oval in Sydney before travelling to Brisbane for the match at Suncorp Stadium.

There are five changes to the squad that lost narrowly to the All Blacks in Round 1 in Buenos Aires.   Hooker Agustin Creevy, who did not travel due to injury, will be replaced by Julián Montoya his regular Jaguares and Pumas team-mate.

At Number 8 Facundo Isa replaces Ortega Desio and Tomás Lezana will start in the backrow instead of Marcos Kremer. The remaining changes will be in the backs. Matías Moroni will move to the centres with  Santiago Cordero moving onto the wing. Fullback Emiliano Boffelli, impressive in Buenos Aires, will be replaced by Joaquin Tuculet, who returns after his injury. On the bench, prop Santiago Socino, is set to make his Pumas debut.