All Blacks Blitz Pumas in Second Half

New Zealand claimed a third successive bonus-point victory in the Rugby Championship on Saturday as they defeated Argentina 57-22 in Hamilton.

The scoreline doesn't tell the full story of how this game played out as the Pumas were very much in the contest for 50 minutes before the All Blacks replacements bench gave the world champions a real shot in the arm.

Gatland would have been intrigued to see Argentina enjoy a strong first-half, however, as they went in just 24-19 behind against a clearly rattled New Zealand side, with Santiago Cordero having crossed the try-line first.

It was an outstanding start for the Pumas when Cordero raced over after the visitors had bust through the middle of the All Black defence. Nicolás Sánchez landed the simple extras from in front and it was game on in Hamilton as, like at Wembley, Argentina scored the first try.

New Zealand missed the chance to cut the gap when Barrett struck the upright from a penalty but their drought was short-lived as from a scrum five metres out, a lovely pull back pass sent Savea under the posts untouched. Barrett made no mistake this time so it was 7-7.

Argentina were proving a hard nut to crack though and were also offering plenty in attack, which resulted in two penalties from Sánchez.

Barrett was not as deadly in front of goal as he missed an attempt but would make no such mistake from in front after Smith finished off a nice try on 23 minutes. It came following another carry from Savea, who was playing well, before the ball came right to the full-back.

That made it 14-13 to New Zealand but again Sánchez was chipping away, pushing his side back in front two minutes later from 40 metres.

Israel Dagg would then slot a penalty from range as again the lead changed hands before a touch of brilliance from Ben Smith saw his grubber through sit up perfectly for Barrett on the left wing, allowing the fly-half to show his speed to score under the uprights for 24-16.

Argentina though deservedly went into the interval within one score when Sánchez struck again and could have cut the gap to two but for a wayward strike late in the half, his first miss of the night. Despite this they had definitely made the All Blacks a concerned team.

The Pumas continued to press their claims early in the second period and were rewarded for their efforts with another Sánchez three points on 50 minutes. Perhaps another positive for the visitors was the fact that coach Steve Hansen made big changes, including replacing Aaron Smith, so early in a Test match. TJ Perenara was the player coming on while Ardie Savea, Charlie Faumuina and Codie Taylor also made early arrivals.

It worked, partly due to Barrett's quality as he followed up a brilliant break with a beautiful offload to Crotty for a try under the posts.

New Zealand had clearly turned the corner and were motoring, with Faumuina next to cross on 57 minutes as the score was now 38-22.

The game was gone for Argentina as New Zealand, with the bonus-point already next to their name, went in search of more tries. Their next went to Crotty thanks to a slick set-piece move off the back of a five-metre scrum, with Perenara's well-timed pass sending him over.

They weren't done there as full-back Smith showed his class once again on 68 minutes with a lovely slalom run to the line from 40 metres out to make it 52-22, leaving opposite number Joaquín Tuculet turned inside out. Somehow the game had turned into a procession for the home side.

Even ricochets were going for New Zealand at this point as a cross-kick from Cruden out to Dagg bounced off the wing's chest for Romano, who had the final say on a quite brilliant second-half from the hosts. 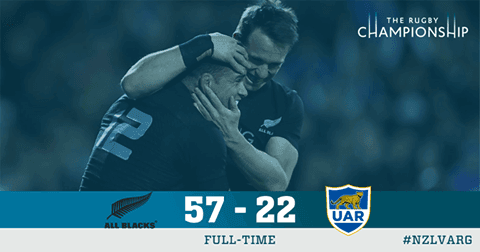