A breathtaking performance by New Zealand saw them demolish Australia 42-8 in a one-sided Rugby Championship opener in Sydney.

While few gave Australia a chance of winning this game, no one expected them to go down at home with the third highest margin ever against their arch rivals.

As scary as the scoreline seems, it's worth remembering that New Zealand left quite a few points on the field considering Beauden Barrett missed three conversions while a try was also disallowed in the first half.

On this evidence it will take something special to prevent the All Blacks from reclaiming the trophy they lost to the Wallabies in 2015.

The All Blacks dominated all facets of play. Their superior handling skills put the Australian defence under immense pressure as they couldn't cope with the line speed and offloading of the men in black.

The Wallabies played into New Zealand's hands by too often kicking possession away aimlessly. They also lost too many line-outs on their own throw which further underlines their naive tactical approach.

New Zealand were all over the hosts in the first half as they placed an emphasis on keeping the ball, resulting in them enjoying 61 percent possession in the first 40. Australia couldn't handle the onslaught and slipped 15 tackles during this period, a sure sign that they were in for a very tough night.

Australia's troubles got worse as the game went on. They lost inside centre Matt Giteau in the 12th minute through an ankle injury. Matt Toomua replaced him but didn't last the half as he had to go off with concussion.

His replacement Rob Horne was forced off the field shortly before half-time with a wrist injury which forced Nick Phipps onto the field.

New Zealand's rush defence put a lot of pressure on the Australian ball carriers when they did have the ball but the defensive line was caught offside a few times which relieved the pressure on the home side.

Ryan Crotty scored the opening try after some clever play by his captain Kieran Read who pulled a defender and got the ball away quickly to the centre who beat his man on the outside to score.

The second All Black try was a direct result of a second consecutive lineout steal. After taking play to the opposite side of the field Beauden Barrett took a gap and run over to give his side a commanding 20-3 lead.

The visitors sealed the bonus point before half time through tries by Jerome Kaino, who charged down a Bernard Foley kick, recollected the ball and scored, and Waisake Naholo who ran a clever line to receive an inside pass from Barrett.

Naholo injured himself in the process but it was of little consequence as it gave New Zealand a 32-3 lead going into the break.

The second half was less lively and for a while it looked as if Australia would be able to limit the damage, but another basic error saw Dane Coles reach over for a try after Julian Savea had pounced on a loose ball which Tevita Kuridrani dropped with his team on the attack.

Savea himself celebrated his 40th Test try shortly after before Phipps scored a consolation try for Australia against 14 men after read had been sent off. 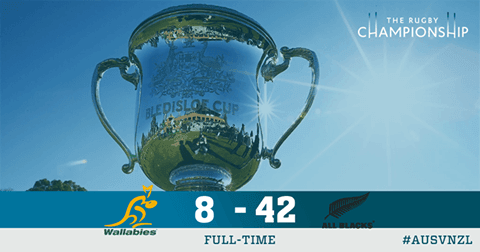