Boks and Wallabies end all square in Bloem

South Africa and Australia could not be separated as they played out a highly entertaining 27-27 draw in Bloemfontein on Saturday.

In a fast-paced and thrilling encounter, in which the lead changed hands several times, both sides gave the ball plenty of air throughout and each team scored three converted tries.

With the All Blacks on course to win the Rugby Championship again, this Test was a shootout for second place in the standings and both sides were competitive throughout although like the corresponding Test in Perth, they had to settle for a share of the spoils.

The Springboks showed their intent from the outset and opted to run the ball from all areas of the field. This tactic seemed to surprise their opponents initially, but the Wallabies adapted quickly and soaked up the early pressure with a solid defensive effort.

And in the 11th minute, the Wallabies caught the Boks by surprise with a brilliant move which saw Israel Folau crossing for the opening try.

This, after an attacking scrum on the edge of South Africa's 22 saw Tevita Kuridrani running a superb dummy line, before Bernard Foley threw an inside pass to the on-rushing Folau, who glided through a huge gap in the Bok back-line before scoring next to the posts.

Foley added the extras, but the Boks were soon camped inside the visitors' 22 and five minutes later, they were rewarded when Ruan Dreyer shrugged off a couple of tacklers before barging over for his first Test try.

Elton Jantjies converted before a Foley penalty in the 23rd minute gave the Wallabies a 10-7 lead but Jantjies restored parity two minutes later with a penalty of his own, after Jack Dempsey was blown up for deliberately knocking down the ball when South Africa were on the attack deep inside Australia's half.

The Wallabies regained the lead in the 35th minute - Foley slotting a penalty after Dreyer was penalised for illegal scrummaging.

Both sides continued to show attacking intent as the half drew to a close, but no further points were scored during this period. Folau was fortunate not to be yellow carded, however, as a rough challenge - in which he pulled Dillyn Leyds by the hair - led to some pushing and shoving off-the-ball between several players, just before the break.

The Boks made a superb start to the second half when, three minutes after the restart, Jan Serfontein crossed for his side's third try after Leyds and Siya Kolisi combined brilliantly in the build-up.

That score meant the Boks held the lead for the first time and although Jantjies slotted the conversion, the Wallabies gave the perfect response shortly afterwards when Foley made a telling break before offloading to Marika Koroibete, who outpaced the cover defence before crossing for his first Test try.

The topsy-turvy nature of this game continued as two minutes later, Serfontein made a telling break before getting a pass out to Courtnall Skosan, who crossed for his side's third try despite the attentions of two defenders.

Five minutes later, the Wallabies struck back - Koroibete rounding off in the left-hand corner after the ball was taken through several phases in the build-up.

Foley showed his class as he calmly slotted the conversion from close to the touchline which meant the Wallabies were now leading 27-24 with just over 20 minutes left on the clock.

The Boks were desperate to strike back and they did just that courtesy of a long range penalty from Jantjies in the 71st minute. That meant the score was level again and although Jantjies had a chance to win the game for the hosts, he pushed a difficult penalty attempt wide of the posts in the dying moments. 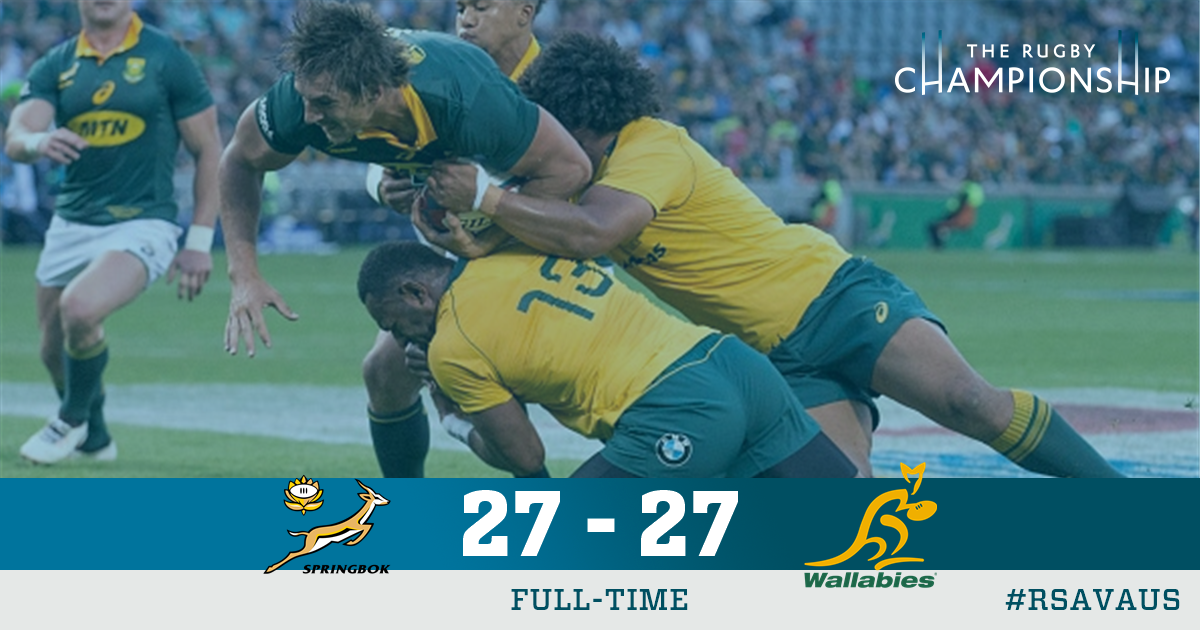