Boks leave it late against Pumas

South Africa fought back from 13-23 down to beat Argentina 30-23 in their Rugby Championship opener in Nelspruit.

Nerves of steel are becoming a mandatory requirement for players and fans alike in the Allister Coetzee era after Warren Whiteley scored a last minute try to complete a strong comeback by the hosts.

There certainly were moments when South Africa must have feared the worst in losing only a second ever home game against the Pumas. But like they showed in the series against Ireland, this Bok team can grind out a win even if they looked wholly unconvincing for large parts of this contest.

Argentina gave everything and will be kicking themselves that they allowed the Springboks back into the game after taking an imposing ten-point lead with 12 minutes to play. The wet conditions definitely played a part in the standard of the game but Argentina will still feel they had a great chance to secure a memorable victory in South Africa.

In the end it wasn't to be thanks to some sublime combination play at the death. The Boks took the ball through the phases from a line-out inside Argentina's 22. Jaco Kriel and Juan de Jongh carried the ball well before the ball went out wide. Eben Etzebeth and Bryan Habana both drew defenders before Habana offloaded to Whiteley, who beat his man to crash over in the left-hand corner.

South Africa started the game strongly and looked up for the game. Jantjies missed an early penalty but soon made up for it when he exploited a gap in broken play. The ball was recycled quickly to Johan Goosen who found himself in space before putting Ruan Combrinck away for a try in the corner.

Argetina were reduced to 14 men when Manuel Montero was sent off for a tip tackle on Damian de Allende, but the Boks failed to capatalise on their numerical advantage. Instead they conceded 10 points during that period through a penalty and a try.

Some thrilling running rugby by los Pumas, which started inside their own 22, resulted in a brilliant try for Matias Orlando which Nicolas Sanchez converted for a 13-10 lead.

South Africa had a great chance to take the lead and ease the pressure when Lionel Mapoe went over after some build-up play following a five-metre line-out. However, replays confirmed he lost the ball going over and the try was disallowed.

The second half didn't start well for the hosts when Habana received a yellow card after slipping and taking out Cordero in the air. Still, Jantjies managed to level the score with a penalty despite Argentina enjoying a greater percentage of the possession throughout the game.

The Boks were guilty of too many basic mistakes, especially in the second half and didn't do enough with the ball when they did have it. Cordero punished some poor tactical kicking by Jantjies to stretch the lead to 23-13 after Argentina launched a counter-attack following a pointless up-and-under by Jantjies.

Etzebeth made a great cover tackle but the visitors recycled quickly before Sanchez chipped the ball over the Bok defence for Cordero to pounce.

South Africa looked down and out at this stage, just like they did in the second Test against Ireland, but they composed themselves and hit back with a try through Goosen to get back into the game. From a scrum, the excellent Faf de Klerk gathered the ball and ran down the blind side, sucking in three defenders in before giving the inside pass to Goosen who timed his run well to run through unapposed.

A Jantjies penalty levelled things at 23-23 before Whiteley finished off with the match-winning try to spare the home side an embarrassing defeat. 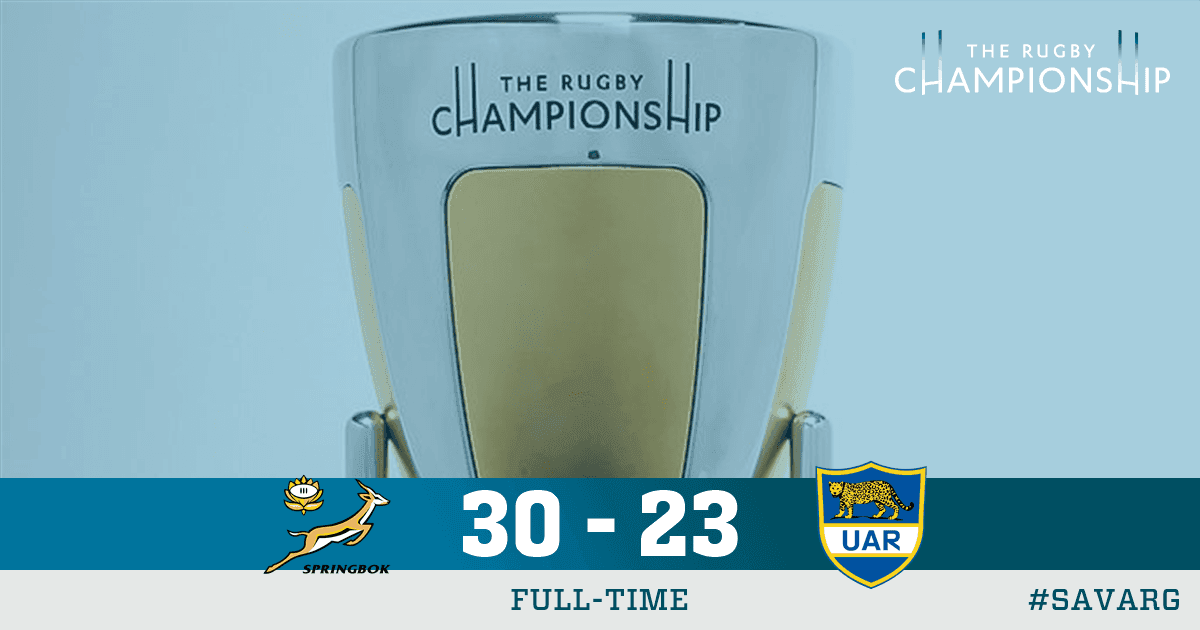