Rampant All Blacks blow Springboks away

New Zealand took a giant step towards winning the Rugby Championship when they claimed a 57-0 win over South Africa in Albany on Saturday.

The world champions were full value for their win and had the result in the bag in the first half as they led 31-0 at the break thanks to an early Beauden Barrett penalty and tries from Rieko Ioane, Nehe Milner-Skudder, Scott Barrett and Brodie Rettalick.

In the end, they outscored their hapless visitors eight tries to none with Milner-Skudder, Ofa Tu’ungafasi, Lima Sopoaga and Codie Taylor also dotting down in the second half and the result is New Zealand's biggest ever triumph against their traditional rivals.

For the Springboks this was a sobering experience as it was their first defeat from seven Tests in 2017. Allister Coetzee's charges looked a pale shadow of the side that beat France and Argentina, and drew with Australia last weekend.

They made a plethora of handling errors while their lineout - an attacking platform in their previous Tests this year - was a shambles with Malcolm Marx and Bongi Mbonambi missing their jumpers with regularity.

The result means the All Blacks now have an eight-point lead on the Boks, who are in second place, in the standings after four matches played.

The sides were evenly matched during the opening exchanges but the Springboks wasted a chance to open the scoring in the eighth minute when Elton Jantjies' penalty attempt struck an upright after Ioane was penalised for holding onto the ball on the ground.

Shortly afterwards, the visitors threw down the gauntlet at a scrum when they pushed their counterparts off the ball at the set-piece just inside the Bok half.

The All Blacks were soaking up the early pressure from their fired up visitors and eventually took the lead in the 14th minute courtesy of Barrett's penalty after Jesse Kriel was blown up for offside play on defence.

And three minutes later, the world champions increased their lead thanks to a well-taken try from Ioane. This, after a moment of magic from Aaron Smith, who played quickly after his side were awarded a penalty just the Springboks' half.

The diminutive number nine spotted a gap behind the visitors' defence and delivered an inch-perfect chip kick which Ioane gathered before crossing the whitewash.

South Africa tried gallantly to strike back but things went pear-shaped in the 21st minute when Milner-Skudder intercepted a wayward pass from Jean-Luc du Preez close to New Zealand's 22.

He was hauled in from behind by Courtnall Skosan but he did well to offload to Barrett who returned the favour before the flyer went over for his side's second try.

The All Blacks further extended their lead in the 33rd minute when Beauden Barrett launched a teasing cross-field kick, deep inside the Boks' 22, which Skosan knocked on before Scott Barrett gathered the loose ball and cantered over for an easy five-pointer.

The Boks seemed shell-shocked but they were soon standing under their posts again when Retallick crossed for the All Blacks' fourth try after a brilliant break from the impressive Ioane in the build-up.

New Zealand continued to dominate after the restart and in the 53rd minute Milner-Skudder went over in the right-hand corner after gathering a long pass from Beauden Barrett.

The Boks were battling now but their was more to follow with the All Blacks' replacements coming on to complete the visitors' misery. Ten minutes later, Tu’ungafasi gathered a pass from TJ Perenara before crashing over from close quarters for his first Test try.

New Zealand were not done yet and in the 74th minute Anton Lienert-Brown tore the Boks' defence to shreds with a mazy run before offloading to Sopoaga who dotted down next to the posts.

Barrett added the extras which brought up a half century of points for his side and just before full-time Taylor added the final nail in the Bok coffin when he dotted down from the back of a driving maul deep inside the visitors' 22. 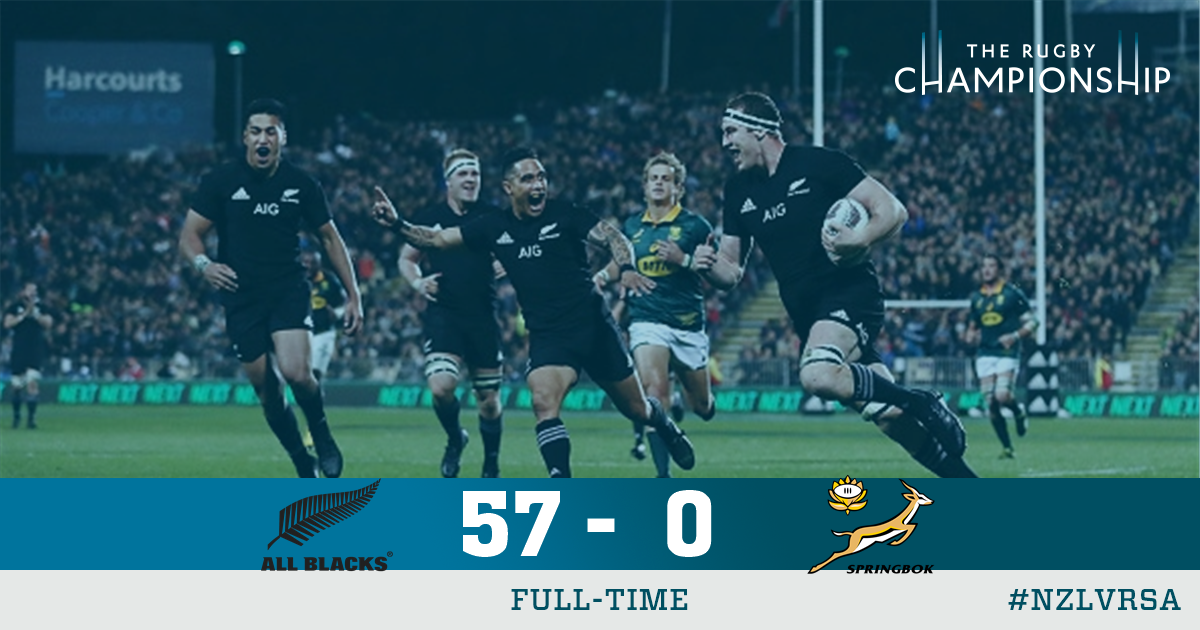