Owen Farrell held his nerve to slot a late penalty and put the seal on a dramatic comeback victory for The British & Irish Lions over the 14-man All Blacks in an enthralling second Test in Wellington.

Second-half tries from Taulupe Faletau and Conor Murray had brought the Lions back into a game it looked like they were going to throw away and Farrell made no mistake in the 77th minute to send the tourists back to Auckland level in the three Test series after a 24-21 victory.

Three penalties each from Beauden Barrett and Farrell meant the two sides went in level at the break in a first half marked by a red card for Sonny Bill Williams for a no arms tackle on Anthony Watson – the first All Black to be sent off in 50 years.

But after the interval it looked like the Lions were going to let a golden opportunity slip as ill-discipline plagued them – Mako Vunipola shown a yellow card – and Barrett turned the screw from the tee.

But after the hour-mark the Lions made their advantage count at last – as Faletau and Murray both went over for well-worked tries and when Farrell added the extras to the second one the game was level heading into the final ten minutes.

And in the 77th minute Kyle Sinckler was tackled in the air and the stage was set for Farrell to hand the All Blacks their first loss on home soil since 2009.

Still stinging from last weekend’s first Test defeat, the Lions came roaring out of the blocks seeking to make amends – Alun Wyn Jones with an enormous first up tackle while his second row partner Maro Itoje was everywhere.

The Wales lock spoiled an early All Blacks lineout in the wet weather while both back threes were being put to the test in an aerial bombardment.

But Itoje also knocked on when an early Lions attack was gathering momentum – Farrell and Jonathan Sexton dovetailing nicely in midfield – as the clinical edge was still lacking for the tourists.

And Barrett – having hit the post with an early range finder – gave the home side the lead soon after with a penalty won by the front row at scrum time.

Farrell’s response was almost immediate, Brodie Retallick offside at a breakdown nearly halfway and the England playmaker banging over a nerveless long-range effort.

Having levelled things up, the game’s decisive moment arrived soon after – Williams shown a straight red by Jérôme Garcès after consultation with the TMO for a no arms tackle to the head of Watson. 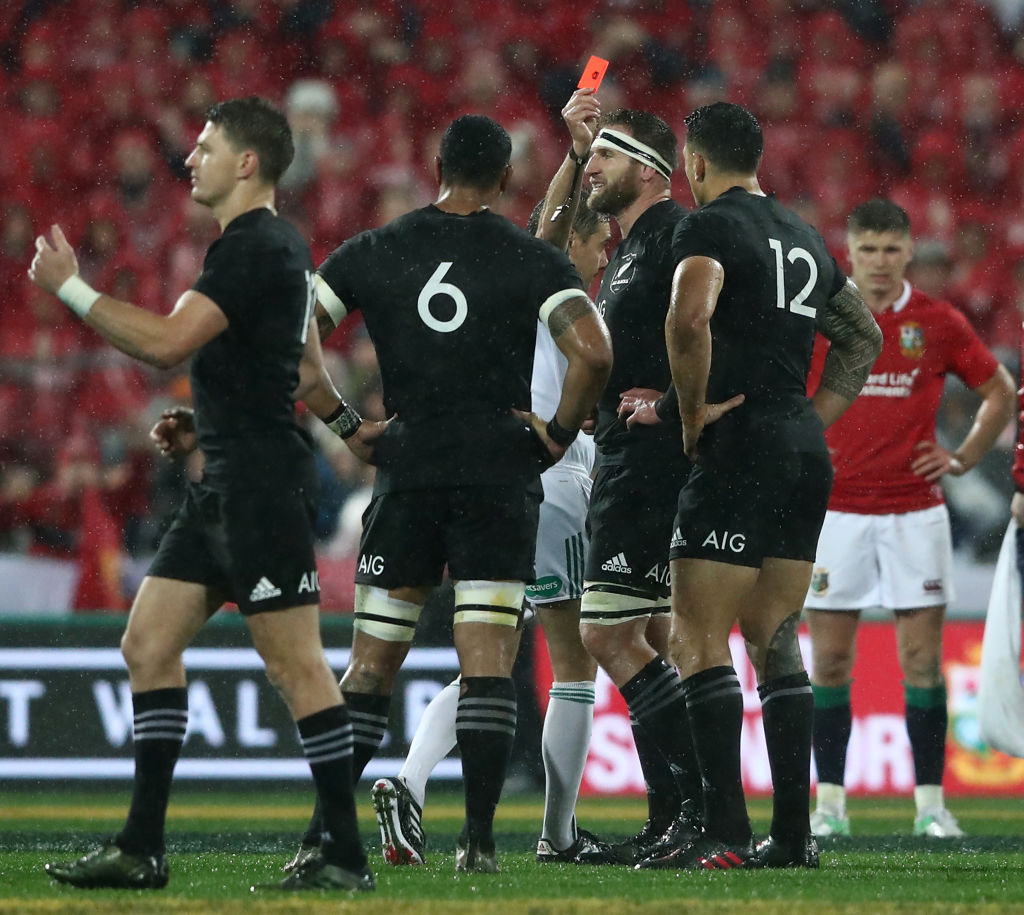 That prompted an immediate reshuffle from Steve Hansen, Jerome Kaino withdrawn for Ngani Laumape as the centre came on for his Test debut while Anton Lienert-Brown was packing down at flanker at scrum time.

But the Lions struggled initially to make the most of the numerical advantage and when Murray failed to roll away it was Barrett who put the hosts back in front at 6-3.

Itoje helped regather the re-start however, and Farrell slotted his second penalty straight away to restore parity.

Overly keen to press home their advantage, the Lions were their own worst enemy as half-time approached – Sexton kicking dead while Mako Vunipola was pinged at a breakdown to allow Barrett to restore a three-point lead.

But before the interval the Lions scrum finally began to earn some dominance to put them on the front foot and although Watson could not quite gather Murray’s clever cross-kick, advantage was being played and Farrell sent the two sides in level at 9-9.

After the break the hosts continued to play smart with 14 men, Laumape carrying hard in midfield but Barrett missed a penalty from in front to give the Lions a reprieve.

Although it was only temporary as a Murray high tackle then gave the fly half another go and he made no mistake to make it 12-9.

The Lions defence was water-tight, indeed it took until the 50th minute for them to miss a tackle, but they could not get a foothold in the second half.

The All Blacks were doing well to take the sting out of the game and although Barrett missed another kick, he also slotted one to make it 15-9 as Itoje and Vunipola in particular struggled with their discipline.

And it got worse before the hour-mark, a dangerous clearout on Barrett earning a yellow card for Vunipola and the fly half twisted the knife to make it a two-score game at 18-9.

Reinforcements arrived soon after for the Lions, Courtney Lawes the first to be introduced and the Lions immediately responded.

From lineout ball off the top, Sexton wrapped around to release Watson down the right and when the ball came back left, Liam Williams fed Faletau who showed great power to brush off Israel Dagg and go over.

Farrell’s conversion was off-target but the Lions were back in it, trailing only 18-14 until replacement Sinckler went offside and Barrett did the rest to make it a seven-point game with 15 minutes remaining.

But once again the Lions dug deep and after Jamie George’s initial burst from Sexton’s pass made inroads it was Murray who sniped over from close range for their second try of the half.

Farrell’s conversion sailed over this time and the Lions were level at 21-21 with ten minutes left.

And after Sinckler was tackled in the air on the charge by Charlie Faumuina, Farrell made no mistake from in front of the posts and the Lions held on to secure a famous victory, their first over the All Blacks in 24 years.