South Africa began their Rugby Championship campaign on a positive note with a 37-15 victory over Argentina at Nelson Mandela Bay Stadium in Port Elizabeth on Saturday.

Tries from Courtnall Skosan, Raymond Rhule, Siya Kolisi and Pieter-Steph Du Toit proved too much for Argentina who scored through Martin Landajo and Emiliano Boffelli.

The Springboks had a healthy 23-8 lead with half an hour to go but the Pumas gave them a bit of a scare bringing it back to an eight-point game. However, the Springbok substitutes made a big impact in the last quarter of the game and ensured a comfortable victory.

It means the Springboks exact revenge for the 26-24 defeat in Salta in the second round of Rugby Championship 2016, the last time the sides met.

Meanwhile, the Boks continue their fine record at Nelson Mandela Bay Stadium where they remain undefeated in five matches at the state-of-the-art venue.

After New Zealand's 54-34 bonus-point win over Australia, the Boks move in to second position on the Rugby Championship standings behind the All Blacks.

It was not the free-flowing game we saw earlier in the day between the Australasian rivals as frequent handling errors and indiscretions made it a stop-start affair.

It is the Boks' fourth win in a row after the three nil series whitewash of France. The last time the side achieved this was a four-game winning streak during the 2015 Rugby World Cup.

Crucial to the Boks' success was their dominance of the scrum and breakdown.

An Elton Jantjies penalty gave the Boks a 10 minute three nil lead after Tomas Lezana was guilty of going off his feet at the breakdown when trying to steal the ball.

And after 20 minutes, Jantjies added three more points from the tee as this time the Pumas were penalised for offside.

Nicolas Sanchez missed an opportunity to half the deficit when Malcolm Marx was penalised for a high tackle. Surprising given that the Pumas fly-half boasted a 87 percent kicking rate with 20 from 23 in Rugby Championship 2016.

But on the half-hour mark, the away side hit back with an excellent counter attack. Tuculet picked up a Jantjies grubber kick and weaved his past a couple of defenders before offloading to Emiliano Boffelli who showed great vision to put it on the boot for Landajo to chase. The pacy scrum-half kicked it further ahead doing well to outstrip Raymond Rhule to collect and dive over in the corner.

The Boks remained in the lead, however, as Sanchez missed the conversion.

Soon after, the Boks scored their first try. From another solid Bok scrum out on the left, Cronje shifted play to the right to Serfontein who passed to Jantjies whose inside ball found Skosan who wasn't held in the tackle. The speedy winger showed good game awareness to get up unheld and race through to dot down for his first Test try.

The first points of the first half came from the Pumas via a Sanchez penalty in the 45th minute. However, Jantjies responded with a penalty of his own after strong work from Jaco Kriel at the breakdown to win the penalty.

As if to emulate Kriel's good work at the breakdown, it was his loose forward partner Kolisi this time who was the catalyst for the turnover after a strong Springbok counter-ruck. Turning down a kick at goal, Springbok captain Eben Etzebeth opted to go for the corner. From the five-metre lineout, the Boks' driving maul was halted. Cronje recycled the ball to Jantjies who passed to Rhule who ran a fine line and was not going to be stopped on his way over the whitewash. Just reward for some sustained Springbok pressure. Jantjies added the extras as the home side led 23-8 after 55 minutes.

Soon after, it was the Pumas who had a five-metre attacking lineout on the right touchline. After a series of powerful carries from their forwards, the ball was switched out to the left where the Pumas showed good hands and created the overlap where Boffelli was waiting to dive over in the left-hand corner. It was well converted by Sanchez out on the left touchline as the Pumas cut the deficit to eight at 23-15.

With 15 minutes to go, the Springboks won another scrum penalty and opted for touch five metres out on the right-hand side. Taking the ball out left and then back to the right, the home side dragged the Pumas' defence one way before coming back to the other side quickly with slick handling ensuring Kolisi had a clear run to the line, making the score 30-15.

Great work from substitute Du Toit gave the Springboks their fourth try as he reached over after a series of powerful carries from his teammates in the build-up.

And there were no further scores as the Springboks ran out 37-15 victors much to the delight of the Port Elizabeth faithful. 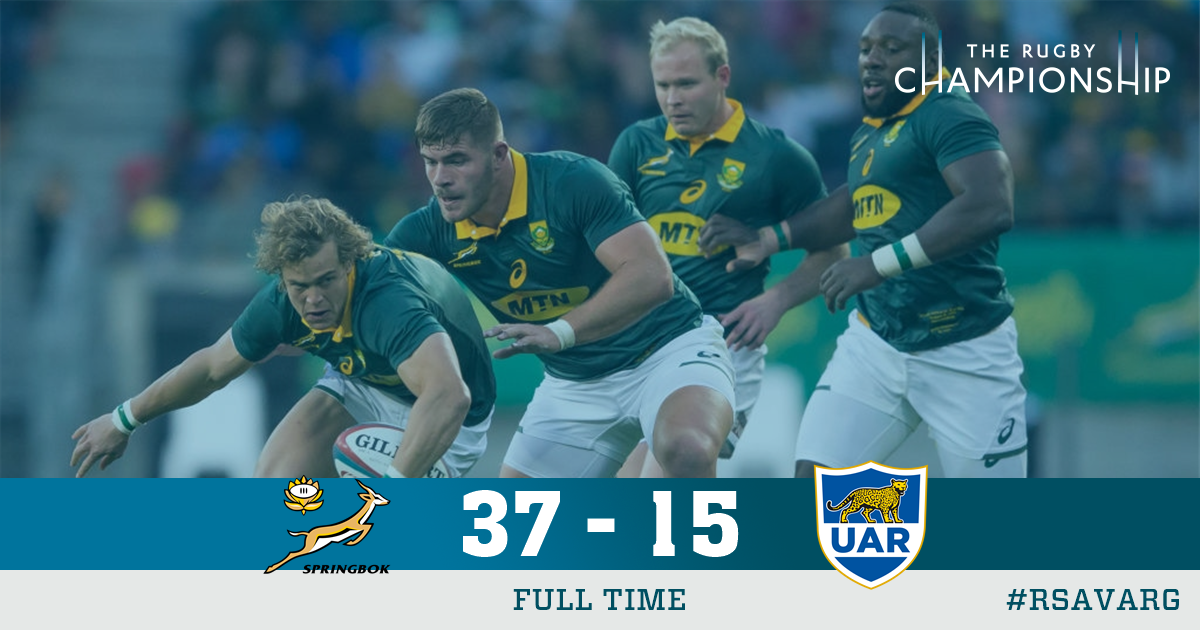