Wallabies Down All Blacks in Brisbane

The Wallabies have defeated New Zealand 23-18 in a Bledisloe Cup clash for the ages at a rain-soaked Suncorp Stadium.

The match came down to the final moments as the Wallabies, holding a narrow lead, held out a late surge by the New Zealanders to register their first win over their Trans-Tasman rivals since August 2015.

Australia outscored New Zealand three tries to two with a man of the match performance from rookie Jack Dempsey, brilliantly supported by his backrow partners Sean McMahon and Michael Hooper, helping the Wallabies to a thrilling five-point victory before 45,107 delirious fans.

The Wallabies ran out in a special Indigenous jersey for the match, honouring the 14 Indigenous players who have represented Australia throughout history.

Qantas Wallabies Captain Michael Hooper said: “Overwhelming sense of satisfaction there. We have talked for a long time about building our results and building our training weeks.

“We said it would go down to 80 minutes, it did. We didn’t win any comps tonight, but it will go a long way in building this team.

“New Zealand kept standing up as they always do, it was a great Test match.

“It was great the hear the crowd believing. To hear the crowd and the fans carry on like that, feels good and it feels great to be Australian tonight.”

Australia was forced to defend for the opening minutes as New Zealand piled on the pressure early, but some brilliant vision in defence from Will Genia enabled Hodge to swoop on a pass from All Blacks flyhalf Lima Sopoaga and scoot 80 metres untouched to score underneath the posts.

New Zealand were patient as they tested the Wallabies defence and were rewarded for their toil when an overlap on the right wing presented Waisake Naholo with an open tryline.

New Zealand then moved ahead with back-to-back penalty goals from Sopoaga to take a 13-7 lead right up until the end of the half.

A determined Wallabies fought hard to have the final say in the first half, and got the crucial breakthrough when Kurtley Beale timed his involvement perfectly to put a barnstorming Israel Folau over out wide for his 12th try of 2017. Bernard Foley’s conversion just shied away from the posts leaving the score at 12-13 at the break.

The pace, tempo and aggression went up a notch in the second half as referee Wayne Barnes twice stepped in to warn players about verbal exchanges and some push-and-shove.

It was the men in gold who struck first in the second half as the Wallabies went into full throttle attack mode, twice spurning the opportunity for a penalty shot in front of the posts. On the second occasion off a lineout win, the Australian forwards rumbled towards the line in a rolling maul before spinning it wide where Marika Koroibete powered over in the corner. The try was Koroibete's fourth in as many Tests.

A 17-13 Wallabies lead soon became a converted-try advantage when Reece Hodge landed the first of two monumental penalty strikes. The first from 45 metres out on the left touchline, followed by another from beyond the half-way line as the clock counted down to the final five minutes.

In between those two moments, All Blacks try-scoring freak Rieko Ioane added yet another to his impressive rookie total which drew the visitors within two points late in the contest. In the end though, it was to be Australia’s night.

The Qantas Wallabies return to Sydney next weekend to take on Alan Jones’ Barabarians at Allianz Stadium on Saturday, before embarking on their 2017 Spring Tour via Japan, where they will meet the Cherry Blossoms for the first time on Japanese soil. 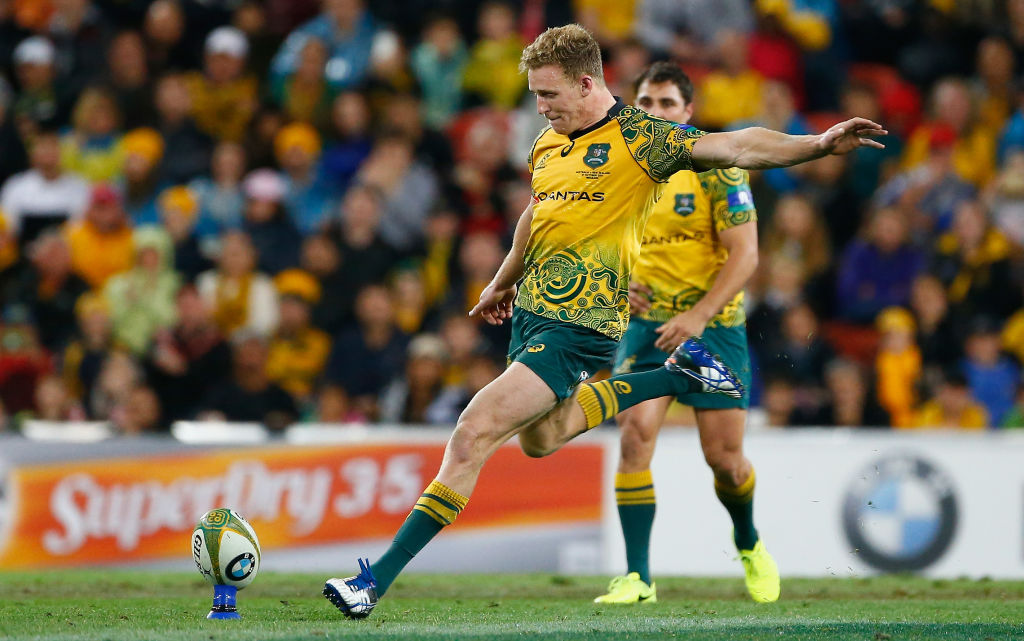