Australia secured a bonus-point 45-20 victory over Argentina in their Rugby Championship clash in Canberra.

The Wallabies displayed brilliant interplay between forwards and backs and were lethal when presented with try-scoring opportunities. An Argentinian yellow card ten minutes from time helped the home side run away with the win, scoring three more tries to secure the much-needed bonus point.

The home side opened the scoring through a penalty goal from fly-half Bernard Foley after Argentina were penalised for another offside offence. After 14 minutes, fly-half Nicolas Sanchez leveled the score with a penalty goal of his own after a Wallaby entered a maul incorrectly.

Pumas scrum-half Martin Landajo scored the first converted try of this clash after he sold a fantastic dummy before diving over the line from a few centimeters out.

Wallabies full-back Israel Folau then scored a converted try in the far right corner after some fantatsic interplay from the Wallabies forwards and backs ended with Foley unleashing Folau, who brushed past a hapless Argentinian defender.

Sanchez slotted another penalty after 35 minutes after a Wallaby was caught offside to give the Pumas a 13-10 lead at half-time.

Wallabies prop Sekope Kepu scored a converted try early in the second 40 when he crashed over from close range after a few solid, patient carries from his fellow forwards.

Folau scored his second in the opposite corner after scrum-half Will Genia sent him a long pass which he gathered before shifting his feet to bamboozle the last Argentinian defender. Foley converted the try and extended the Wallabies lead to 11 points.

Ten minutes before the final whistle, Argentina gave away another penalty after an early engagement and prop Enrique Pieretto was sent to the sin bin. From the resulting scrum, Genia broke and dived in for his try before Foley converted to make the score 31-13 to the home side.

Australian number eigh Sean McMahon then broke before passing inside to reserve scrum-half Nick Phipps, who just had enough gas and arm stretch to score his side's bonus point try.

Pumas wing Matias Moroni chipped and gathered in sensational fashion down the right wing to score in the 77th minute before Sanchez added the extra two points. But the home side hammered in the final nail in Argentina's coffin after the final hooter had sounded when reserve hooker Jordan Uelese scored from a close-range leap before Foley's conversion sealed their bonus-point victory. 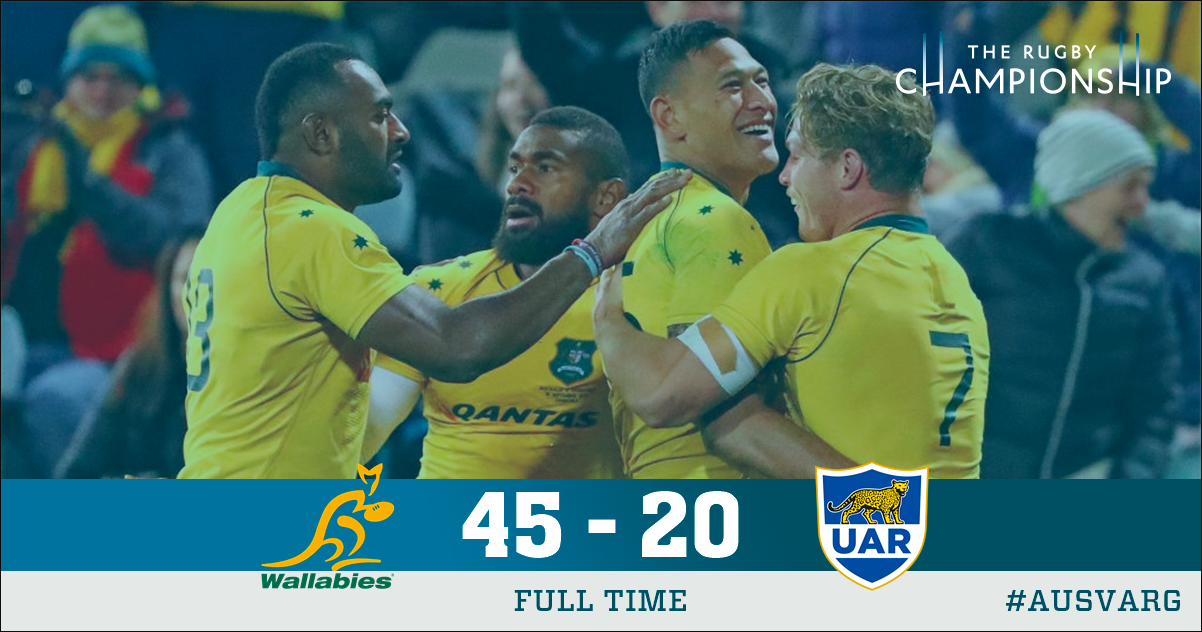