Who Did What in 2016 Rugby Championship?

The 2016 Rugby Championship saw the conquering All Blacks win an historic perfect clean sweep – winning all six matches with six bonus points.  It was a clinical display from the world’s top ranked team who in the process equalled its own world record of 17 straight Test wins after beating South Africa in the last round of the Championship.

The All Blacks can set a new world record of 18 Test wins if they beat the Wallabies in Auckland in the third Bledisloe Cup match of the season (which is outside of the TRC). The Wallabies won half of their six TRC matches to finish the Rugby Championship in second place.

The All Blacks success has seen them set a new high water mark of 96.57 in the World Rugby rankings, and set a record gap [7.08 points] to the second-placed team England.

The All Blacks dominance is reflected in the tournament statistics with All Blacks featuring in virtually all of the top five categories (see below). A standout performer was fly-half Beauden Barrett who was the top scorer (81 points), ran for the most metres (395 metres), beat the most defenders (24), was joint-second highest try-scorer (4 tries), second highest ball carrier (70 carries) and fifth best in terms of clean breaks (10). 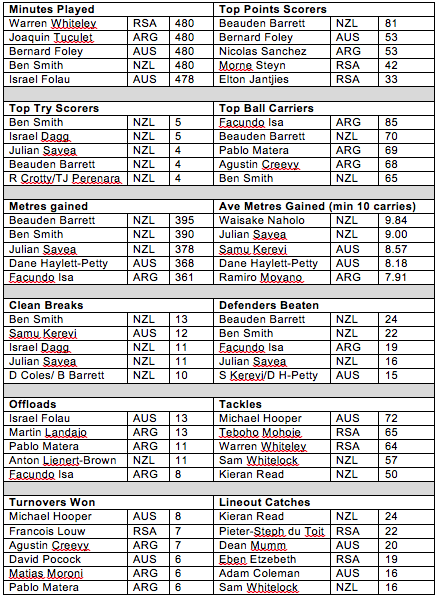 The team match averages are equally impressive as the All Blacks led most categories including: Ball carries, metres gained, line breaks, defenders beaten and scrum wins and percentage success.

Interestingly the Pumas led the statistics in terms of turnovers won, rucks won and time in possession but this did not necessarily lead to points or tries but does show how competetive they were despite achieving one victory.  The All Blacks and Pumas scored more points per game than the Wallabies with the All Blacks scoring an impressive 6.3 tries per game. 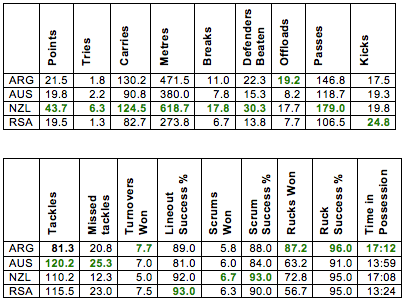